Global Health 50/50 is an independent, evidence-driven initiative to advance action and accountability for gender equality in global health housed at The UCL Centre for Gender and Global Health.

Global Health 50/50 is an independent, evidence-driven initiative to advance action and accountability for gender equality in global health. When we formed GH5050, our collective agreed on a simple principle as a goal. The collective and its work can only be deemed a success when global health policy and organisational decision-making puts a gender lens, gender equality and health equity at the core of all it does.

For decades, our collective members have researched, advised, advocated for, published and delivered policies and programmes to promote gender equality and health equity. Global Health 50/50 was borne out of our shared frustration that despite evidence, change wasn’t happening fast enough. Our academic outputs on gender and health were falling on deaf ears. Evidence alone, we knew, doesn’t cut through the noise to change policy and practice. So we decided to change the rules of the game.

Global Health 50/50 was formed around a unique model which brings together the rigour of academic research, the knowledge of how policy change can occur and the momentum of advocates and communicators to catalyse progress. Coupled with a high-powered Advisory Council positioned to support this mission, our model is intended to act as a channel to bring evidence and policy together, thus fast-forwarding the pace of change for gender equality and health equity.

Our initiative brings together leading feminists, doctors, academics, policy and political experts from all corners of the world. From the former Prime Minister of New Zealand and UN policy leaders, to journalists, advocates and university academics, GH5050 is the most experienced and powerful team assembled to tackle this issue. Meet the team.

Global Health 50/50 was co-founded and is co-directed by Professor Sarah Hawkes and Dr Kent Buse. It is supported by University College London, one of the world’s leading universities, where it is housed in the Centre for Gender and Global Health. We have received funding from The Wellcome Trust, among the world’s largest investors in health research, and a philanthropic donor who chooses to remain anonymous.

GH5050 formed to provide the energy and evidence for leaders, employees, advocates and organisations to make tangible progress towards gender equality and health equity. Evidence points to a sector in need of urgent change in order to deliver health for all and practice the values and principles it espouses.

Through our unique model, we work to catalyse urgent progress through shifting institutions, ideas and interests:

The report and its accompanying index review performance and catalyse change in policy and practice across 200 of the most influential organisations active in health and health policy. Our Index offers the most comprehensive overview on the state of gender and equity in global health to date.

Our How-to guides build on our report findings to offer actionable guidance for organisations to improve gender equality. View the annual reports.

Alongside our Report and Index, we work to shape ideas.

We raise awareness of the role gender plays in determining health outcomes of all people, as well as the impact that gender norms have on career pathways and across society more generally. From disseminations, debates and academic publications, through to our This is Gender photo contest, we are working to shift the narrative on gender.

We highlight the benefits of placing gender at the heart of global health. Essential to this is celebrating success, sharing examples of best practice and highlighting case studies of change to create a collaborative community of change-makers in global health.

Most importantly, we place transparent data in the hands of employees to empower them to change the organisations they are part of. We are building a policy community of actors and influencers who can work directly to advance this agenda.

View our theory of change 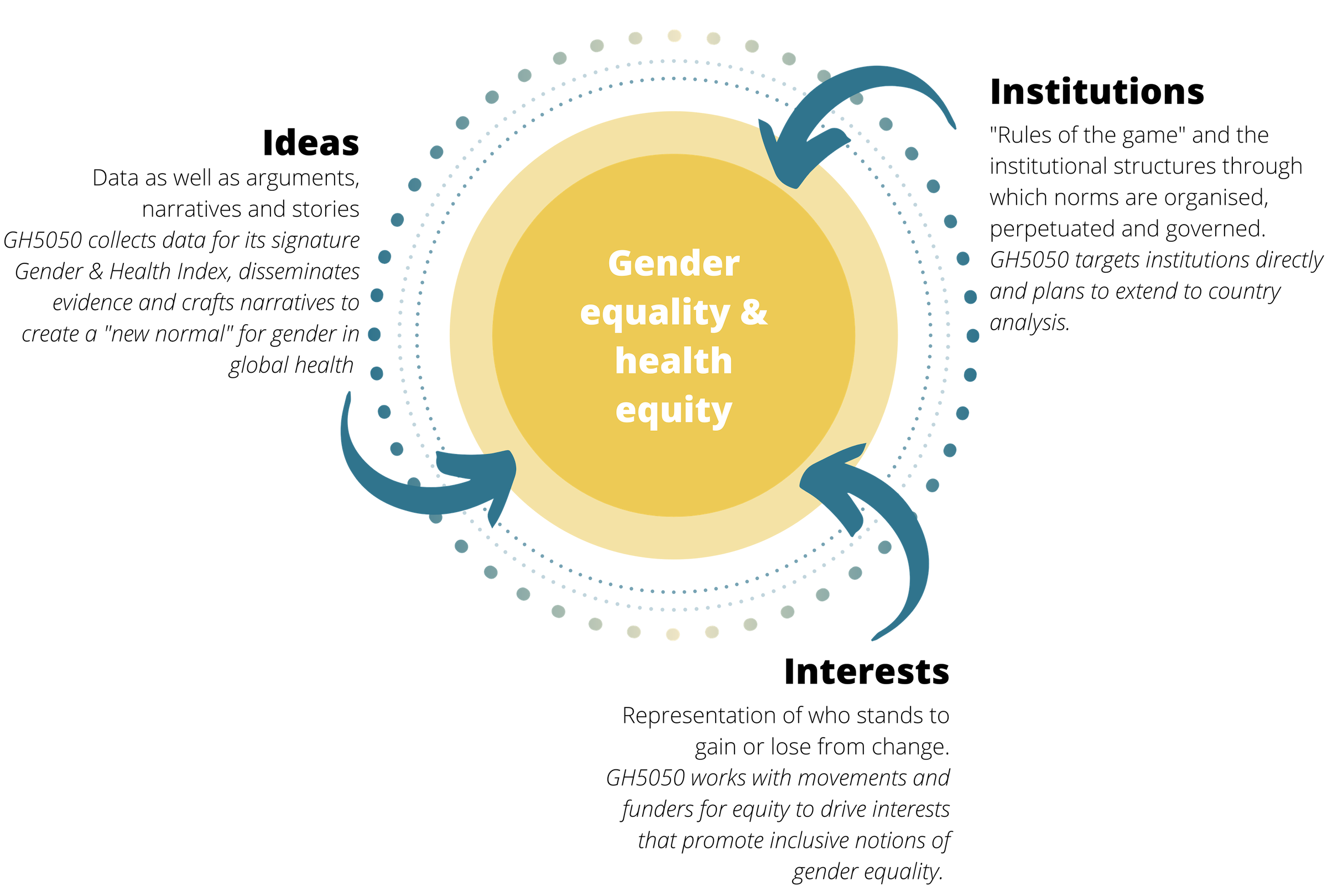 Alongside our global reports, which will continue to assess organisational performance at the global level, our next step includes more actively supporting the efforts of our partners in countries to apply similar methods to demand and deliver change for gender equality.

Ultimately, Global Health 50/50 believes that rigorous independent analysis placed in the public domain, amplified by motivating narratives about positive change will help drive progress in this decade of delivery on the Sustainable Development Agenda and validate the decisive role that gender equality will play in their achievement. By working in this way, GH5050 is effecting change among the most influential organisations, right at the source of their work.