‘If we don’t go to these spaces and we don’t reclaim them, it’s like we don’t exist’ – an interview with Lee-Ann Olwage

Congratulations to Lee-Ann Olwage, winner of This is Gender 2021 for her image Black drag magic – portrait of a drag artist and activist.

Praised by our panel of international experts for its powerful composition, visual texture and bold take on the theme of the competition, we’re proud to feature Lee-Ann’s Black drag magic on the front cover of our 2021 report Flying Blind. 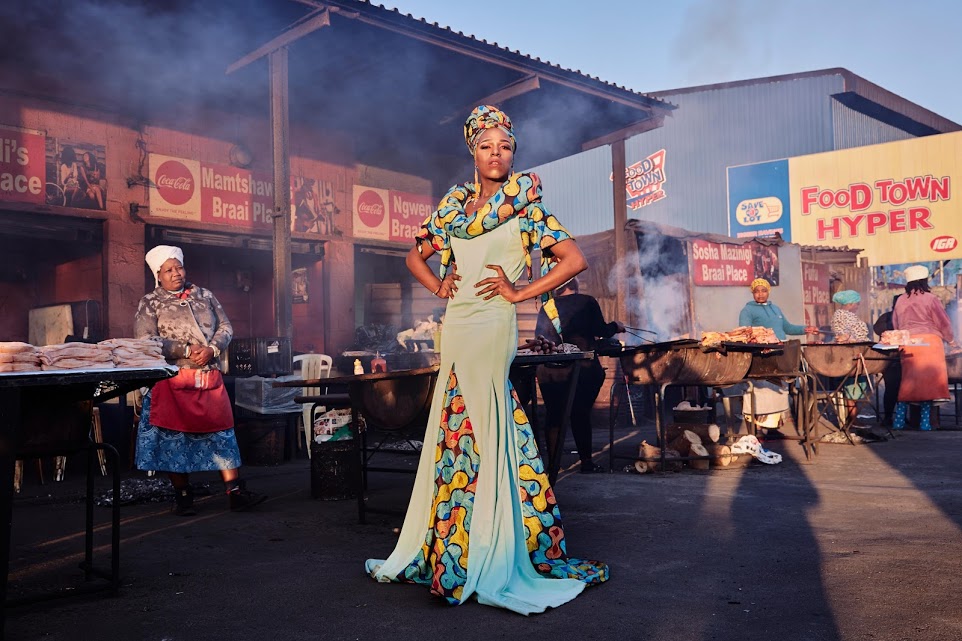 As part of our Representation Matters series, This is Gender curator Imogen Bakelmun connected with Lee-Ann to hear more about her winning image, the project more broadly, and why learning to see through photography is an important tool for effective and equitable social change.

Belinda Qaqamba Ka-Fassie, a drag artist and activist, poses at a Shisanyama—a community space where women cook and sell meat—in Khayelitsha, a township located on the Cape Flats, near Cape Town, South Africa. Defiantly positioned in the centre of the frame, hands on hips, gaze unbroken, Belinda draws the admiration of the local food sellers.

The image forms part of a broader collaborative project between South African photographer Lee-Ann Olwage and activist Belinda Qaqamba Ka-Fassie that seeks to tell the stories of black, queer, gender non-conforming and transgender people who grew up in the township.

Lee-Ann explains, “The project is about augmenting the power in the stories of daily township spatial navigation, migration, culture-,gender- and sexual identity. It was created to serve as a platform of expression for black queer individuals”

As Lee-Ann describes in the video, life in the townships for queer people can be perilous; a reality that sharply contrasts Cape Town and more broadly South Africa’s reputation as a haven for queer people.

In the aftermath of apartheid, South Africa’s government hurried to introduce new inclusive legislation, passing a series of laws that enshrined gender equality and safety and protection for all. In 1996, it was the first country in the world to offer full constitutional protections against discrimination based on sexual orientation, and in 2006, it became the first (and only) nation on the African continent to legalise gay marriage. However, it has become increasingly clear that a fissure exists between the legal promise and the everyday reality of being queer in South Africa, particularly in townships such as Khayelitsha.

A survey by Out, a South African LGTBQ+ rights organisation, that surveyed the experience of more than 2,000 LGBTQ+ people in South Africa found that 39% had been verbally insulted, 20% treated with harm, 17% chased or followed and 10% physically attacked. It is also estimated that the statistics are in fact far higher, but out of fear of persecution, retaliation and shame many are afraid to speak out about their experiences of discrimination. Indeed, in 2011, Human Rights Watch flagged LGBTQ rights in South Africa as one to watch in response to the phenomenon of “corrective rape,” against lesbian women and trans people in an attempt ‘cure’ them.

For queer people like Belinda, violence and social-spatial exclusion is a daily reality- a reality that Lee-Ann was concerned by. She explains, “One of the initial things that came up in our first meeting was that I was very concerned for the safety of everyone involved in the project.

But Belinda said something that really made me think about whether we should do this or not. And it was that if we don’t go to these spaces and we don’t reclaim them, it’s just like we don’t exist. And that stuck with me for quite a while. And it was a very difficult thing to accept. I decided that it would be the right thing to go as a group and despite the risk that it would be an important part of the activism that we were hoping to create with this project.

“The process of creating the project became a radical and progressive act of activism to reclaim the township and to stand up against the overwhelming climate of discrimination black queer bodies face in the township. “

The image of Belinda visually captures the dynamic, complex and sometimes messy intersections of blackness, queerness and class. Belinda wears a bright, colourful Xhosa garment that roots them in their Xhosa culture, they are standing in the centre of an impoverished township relegated to Black South African’s during Apartheid.

When we encounter Belinda in this image, we are forced to see beyond reductive singular descriptors ‘black’ ‘Xhosa’ or ‘queer’ and begin to see the various ways that multitudinous constructs shape health, wellbeing and reality. Indeed, being a black queer South African poses different challenges, struggles and issues than those faced by white South African. In a 2017 study by the Equality & Justice alliance, they found that 49% of Black members of LGBTQ+ communities in South Africa are likely to know someone who has been murdered for being LGBTQ+, compared to 26% of white community members. Belinda’s body is sexualised, gendered and racialised by society.

Moreover, blackness is an umbrella term that encapsulates diverse cultural and ethnic identities. Belinda is Xhosa, one of the four major ethnic divisions among Black South Africans, and this cultural identity also contours their queer experience. For example, in the Xhosa language, there is no word for queerness which means that expressing their queerness to families and communities can be incredibly difficult.

For Lee-Ann, it is these nuances and lived realities that must be seen and understood and then, ultimately, incorporated into policy and action, for equality and equity to be delivered to all.

She explains, “I think it’s very important when laws are being made to really think about it a bit more realistically and to think about the cultural impact, get communities involved, look at cultural dynamics, think about things like language. I think that implementing the law is the first layer, but that we really need to look much wider than this and really think about how do we practically implement these laws and what will really have an impact.

“And that only really happens when you truly involve the community that you’re working with or people you collaborate with where you get to really understand the experiences and share of it. And from that, I think we get a better perspective of what works and what doesn’t and how to successfully bring about change.”

When we fail to see people in all their complexity, we fail to act effectively. And perhaps this is where we should draw on powerful, reflective and critically engaged photography.

As Lee-Ann describes, “As visual storytellers, we have the opportunity to inspire change and to shed light on important issues in the world. Photography can be a really powerful medium to shift ways of thinking about issues and to highlight new innovative solutions.”

You can discover more of Lee-Ann’s work on her website and browse the full collection from This is Gender 2021 here.