Jacqueline Ennis-Cole is a neurodiverse artist, curator, poet and photographer born in Manchester, UK. Her photograph ‘Meeting Ground Series’ was long listed for the This is Gender 2021 competition and was recently featured in the Global Health 50/50 2022 report: Boards For All? A review of power, policy and people on the boards of organizations active in global health.

As part of our Representation Matters series, communications consultant Alex Parker connected with Jacqueline to hear more about her journey as a photographer and how her focus on the everyday reveals the deep environmental and economic crises we are facing as a planet.

“What role will notions of gender play in this new technological era?” 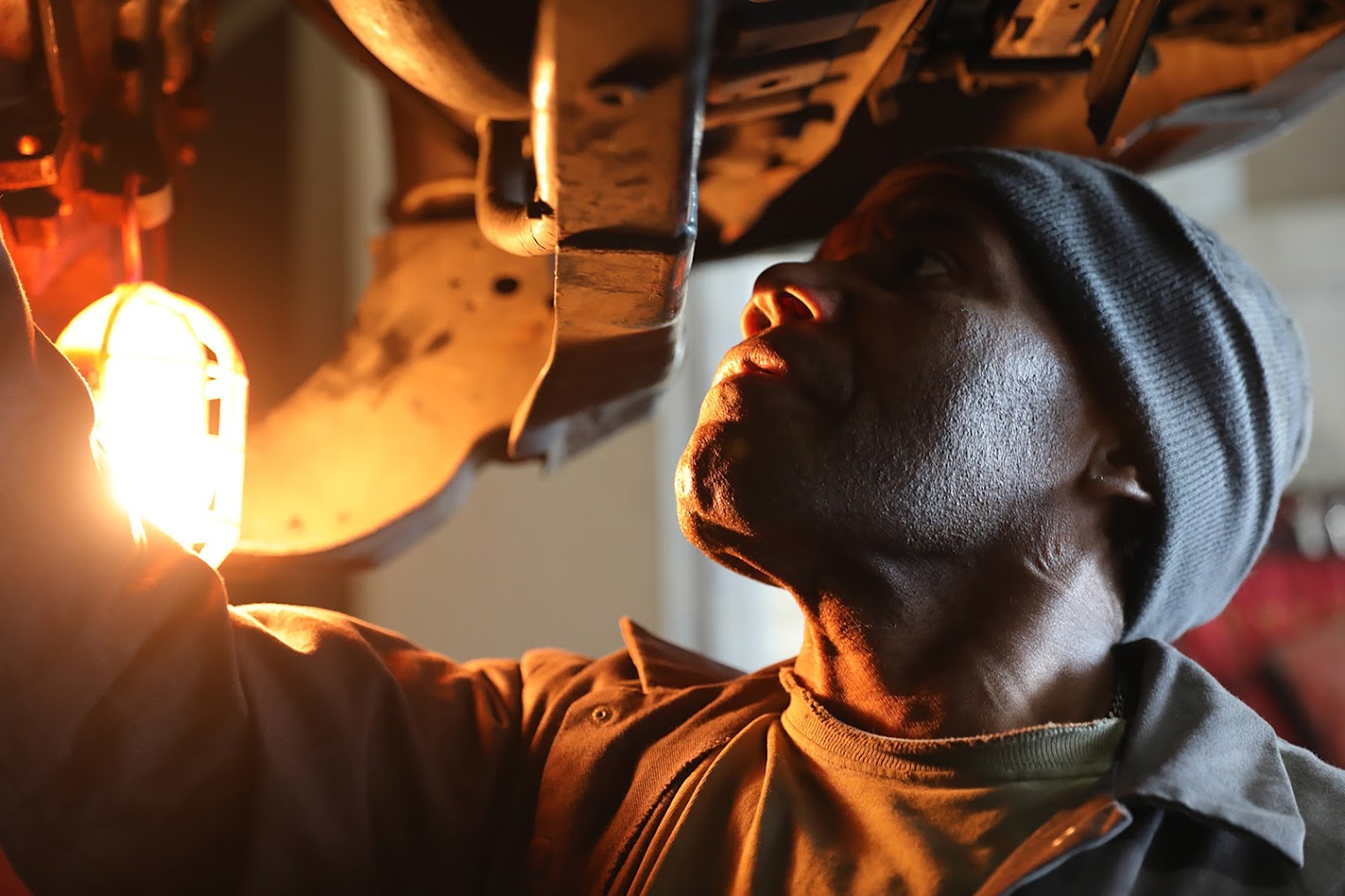 The glow from a workman’s lamp lights up the edge of Lawrence’s face as he looks up at the underbelly of a vehicle. Although the cool daylight can be seen from the left, the image also evokes the cavernous atmosphere of the garage. This is echoed in the title of the photographic series – Meeting Ground – by Jacqueline Ennis-Cole.

Lawrence is a migrant from the Caribbean now living in the UK and learned to be a mechanic through an apprenticeship programme. The photograph depicts his physicality, skillfulness and masculinity reinforcing the ways in which economic and cultural processes have long associated cars with masculinity. But independent garages are now rapidly closing down as diesel cars transition to electric cars and more and more franchise garages take over. This highlights many issues for Jacqueline, the photographer, who asks: “What role will notions of gender play in this new technological era?”

Jacqueline, who identifies as gender fluid, describes the location and the interior of the garage – as ‘enclaves of masculinity’. Despite the gendered nature of these workplaces, Jacqueline felt welcome in the garage – a feeling she attributes to Lawrence’s warm and friendly manner. Lawrence collected toy cars as a teenager and lept at the opportunity to become a mechanic. He perhaps did not consider the gendered status quo that shaped his career path. However, Jacqueline’s photographs do raise these questions, particularly as they relate to current economic and environmental crises.

She calls attention to how the shift to electric vehicles has put many independent garages out of (business) action: “The kind of labour that mechanics engage in is manual labour and people ask ‘why don’t you retrain people so that they can shift from manual to more advanced technology?’ But the technology is very different and is more computer driven technology. And this approach to retraining seems to be part of our throwaway society because these mechanics have all this knowledge and hands-on skill – they are like the surgeons of a car – and so we are supposed to evolve but there is also a huge loss of knowledge.”

The everyday and the overlooked

Hands feature quite prominently in Jacqueline’s photographs of the garage, emphasising the manual labour of being a mechanic. A hand grips a circular car part in the foreground while the body is obscured in the background. In another image, the hand is the subject and the oil-stained creases mimic the texture of the mechanic’s overalls. 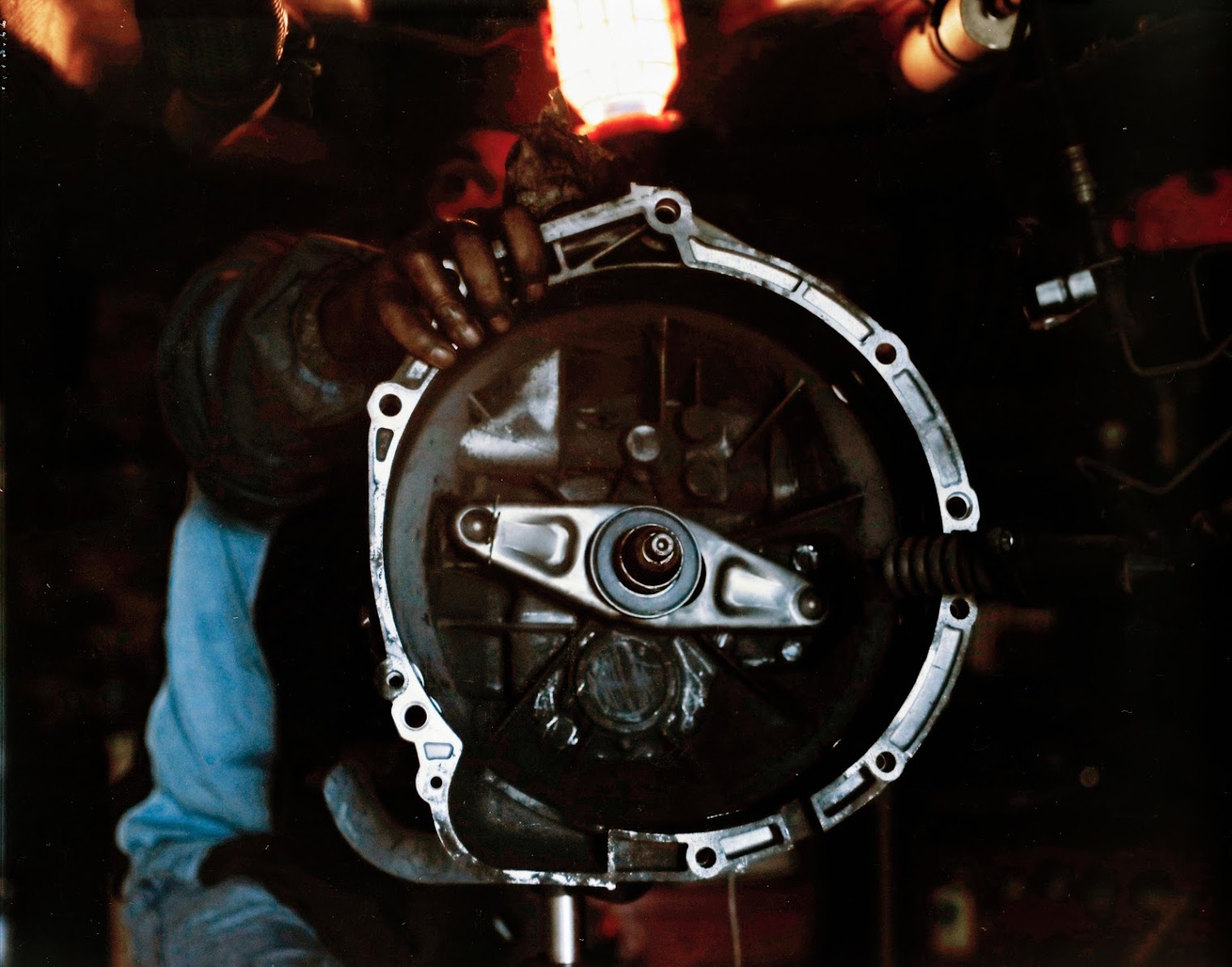 For Jacqueline, with life experience of living on the margins, she is attuned to and resonates with the ‘everyday’ and the ‘overlooked’: “this is where intuition imbues the lens in certain directions.” Her photographs go “beyond the present day transactional industrial world of affairs to produce something unspoken and timeless.” She describes this process as a “way of honouring the trust that has been offered.”

It is Jacqueline’s sensitivity to her subjects and her care with the camera that enable her to translate the ordinary (object or activity) into a profound image – one that is both familiar and novel. Working at the local level and at the small scale holds a keen meaning for Jacqueline: “I’m interested in the micro in our lives because I feel it’s the big things that make us feel powerless or overwhelmed. But in the microscopic areas of our lives there are a lot of opportunities to grow and to develop intimacy and to communicate meaning.”

The ethics of photography

Jacqueline’s journey as a photographer has been circular: “I first became interested, or shall I say involved, with photography as a teenager in Paris. I felt after a duration in the field that I was far too young to be tasked with the huge responsibility and burden of photography at such a tender age and (learning) stage of life. I then experimented with painting for a while then found my vocation in transformative community development work and social engagement.” She immersed and invested the next 20-30 years working with grassroots communities and people living at the margins – those with complex mental health, people living with addictions, those who had encountered the criminal justice system, and others such as the homeless living on the streets. 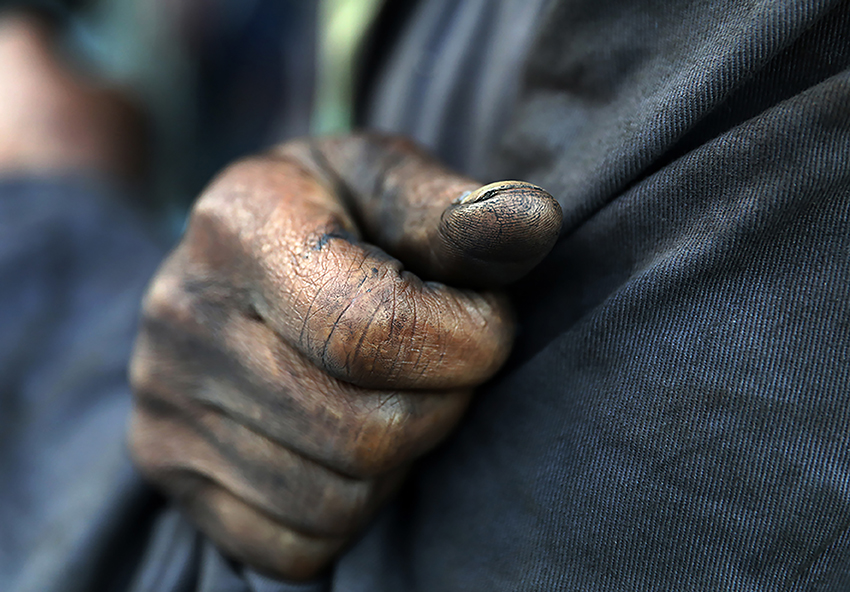 Her return to photography came when Jacqueline was working with mothers living on Ukerewe Island in Tanzania, a place known as a population with the highest concentration of people living with albinism. Jacqueline brought several Polaroid and instant cameras to the island so that she could share the photos she made with the women. For Jacqueline, photography is an extension of her radical care work: “I would say though that being an artist, curator, photographer and poet in my personal experience is intermingled with empathy, compassion and with a love of visual forms of expression and visual language.”

As a neurodiverse artist, the medium of photography helps Jacqueline to reflect on and process the world around her and often means she spends longer working on a project connecting with people and subjects in a more substantial way. “I’m quite interested in unpacking and looking at what the art project signifies for me as a human being at this time and and then following on those conversations.” Jacqueline’s work is an evolving conversation, between herself and her environment: “photography helps me to understand life.”

You can discover more of Jacqueline’s work here and browse the full collection from This is Gender 2021 here.

For any queries regarding This is Gender or Representation Matters please contact Alex Parker – alex.parker@globalhealth5050.org