As part of our Representation Matters series, This is Gender curator Imogen Bakelmun connected with Anwar to hear more about his winning works, his ideas on photography as a tool of empowerment, and what it means to represent his community on a global stage.

‘You have to see him, but you don’t have to know him’ 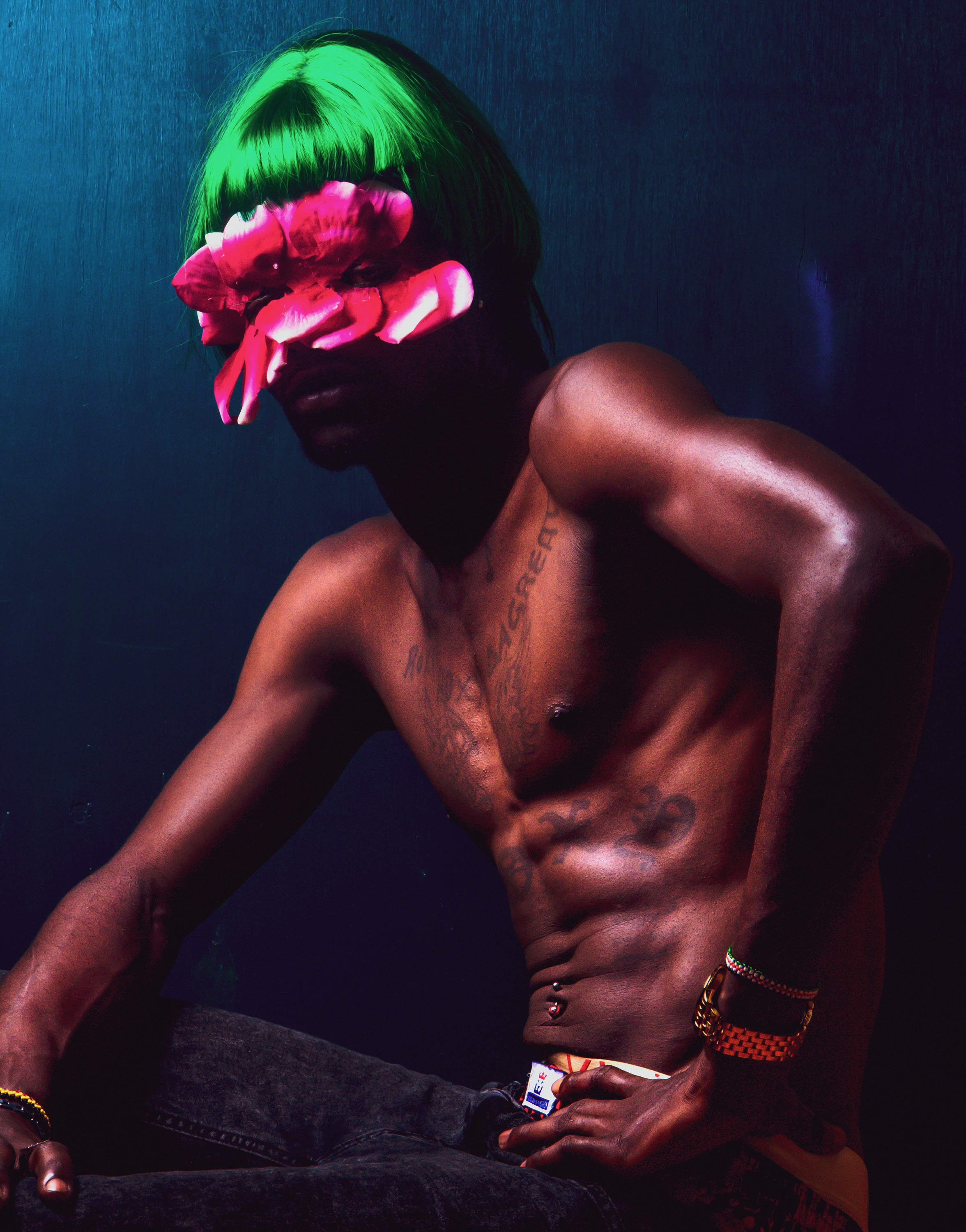 Behind the pink petals that cover his eyes and a luminescent green wig is Ryan, a 24-year-old Ugandan refugee living in Kenya. Ryan is one of the thousand Ugandans forced to flee his homeland in fear of violence and imprisonment due to his sexuality.

Uganda is not only one of the 32 countries in Sub-Saharan Africa that criminalize sexuality, it is also one of the most extreme in the cultural war against homosexuality. In the F&M Global Boramoter of Gay Rights (GBGR) which measures the extent to which countries are human rights protective or persecuting towards sexual minorities on a scale from A-F, Uganda scored F. The Ugandan Minister of Ethics and Integrity Simon Lokodo has repeatedly described homosexuality as “disgusting” and “not natural to Ugandans” and surveys reveal roughly 93% of Ugandans are opposed to homosexuality.

The recent escalation of violence against and repression of the Ugandan LGBTQ+ community, as well as the introduction of the new Sexual Offenses Bill has led many to believe that the government is looking to reintroduce the infamous 2014 “Kill the Gays” bill that increased the penalty for homosexuality from life in prison to death. For many queer Ugandans, like Ryan, seeking asylum in neighbouring countries is a matter of survival.

Anwar first met Ryan at a friend’s house, a safe space for Ugandan refugees. But Anwar was uneasy. Ryan had piercings in his ears, navel and nose and was dressed differently from others. Ryan noticed, but rather than getting angry, he comforted Anwar and explained that many are uncertain of him and that he was used to it. Anwar was ashamed of his prejudice towards Ryan.

He explains, “I felt guilty. Being gay or being different is not something that should be perceived as strange or uncomfortable. I had judged him on the way he looked and it was unfair of me. I wanted to do something, not just to appease my guilt, but also to help to change the way gay people are perceived. I don’t want the world to see him the same way I did, it is wrong. Sexuality is not a choice, but rather fundamental to who you are.”

“I wanted to tell his story through my photography, to help people to understand and to encourage people to think before they judge. I felt like it was my responsibility to communicate something deeper to anyone who would listen about what it means to be oppressed and what it means to be forced into the shadows.”

“Photography is a tool to communicate to the world things that we may not understand or experience ourselves. It is a means of connection and compassion. The issues that shape Ryan’s life are not unique to Kenya or Uganda, they are global issues. The debate around gay rights is everywhere, and we hear the same questions of what is right and what is wrong in gender and sexuality echoed throughout the globe. I wanted to produce a work that brought some humanity to the debate.”

Flowers are beautiful plays between anonymity and identity, concealing and revealing. Ryan’s eyes are covered, but his chest is bare. We have only his first name, but through the caption, we hear his own words. He is both there and not there.

As Anwar describes, “His life has been at risk, he ran away from Uganda to Kenya because of who he is. I thought, if I am going to tell his story, and if he is going to be comfortable with me telling his story, he has to be in the story without being in the story. You have to see him, but you don’t have to know him.  I wanted him to be there without being there. That is how he has to live his life.”

For queer refugees in Africa, the question of visibility is complex. On the one hand, visibility is essential to bringing light to human rights violations and injustices. It can mobilise social and political discourse and encourage action and change. But on the other, it can expose vulnerable people to danger and further persecution.

For Anwar, navigating this complex balance is an exercise of reflection and collaboration. Visibility, Anwar argues, is not simply the act of rendering something visible but also of empowerment and expression. It is possible to see someone without exposing them completely. In Flowers are beautiful, Anwar and Ryan constructed a delicate disguise using Ryan’s favourite things, flowers. As Ryan himself explains, “Everybody loves flowers because flowers are beautiful. If anyone learned about me, I would be dead. So I have to hide my identity for my safety and protection. When you look at me this way, you will love me because I look like a flower. I am not a flower but I can’t be me either. I can only be beautiful in my own way.”

Glossy, polished and posed, Anwar’s portrait of Ryan is a far cry from the usual images we see of the struggle of LGBTQ+ people in East Africa. For some, Ryan’s image may not seem as impactful or stirring as the kinds of reportage or photojournalism that we’re used to seeing in the human rights space. It may not seem a natural fit for a Global Health report or advocacy campaigns. But for the This is Gender panel, the image raises important questions about what it is to see and to represent and offers a solution to the complex issues raised in the ethics of visibility.

Anwar’s editorial style proactively questions the arbitrary lines we draw between reality and fiction, truth and dishonesty, in representation. It forces us to consider; why do we have to witness suffering with our own eyes to believe in the suffering of others? Why does a subject have to look vulnerable and dejected to elicit empathy? Why do we dismiss the beauty, strength and creative expression in images like Ryan’s, rather than recognise the empowerment, honesty and the story that it tells?

‘Photography is a tool to express not only your way of seeing, but also the world around you.’

Anwar’s photographic works and approach to representation is shaped by his own reality. Anwar grew up and continues to live in the largest urban slum in Africa called Kibera, situated southwest of Nairobi, just 4.1 miles from the city centre. The sprawling settlement is home to an estimated one million residents, many of whom live in extreme poverty. 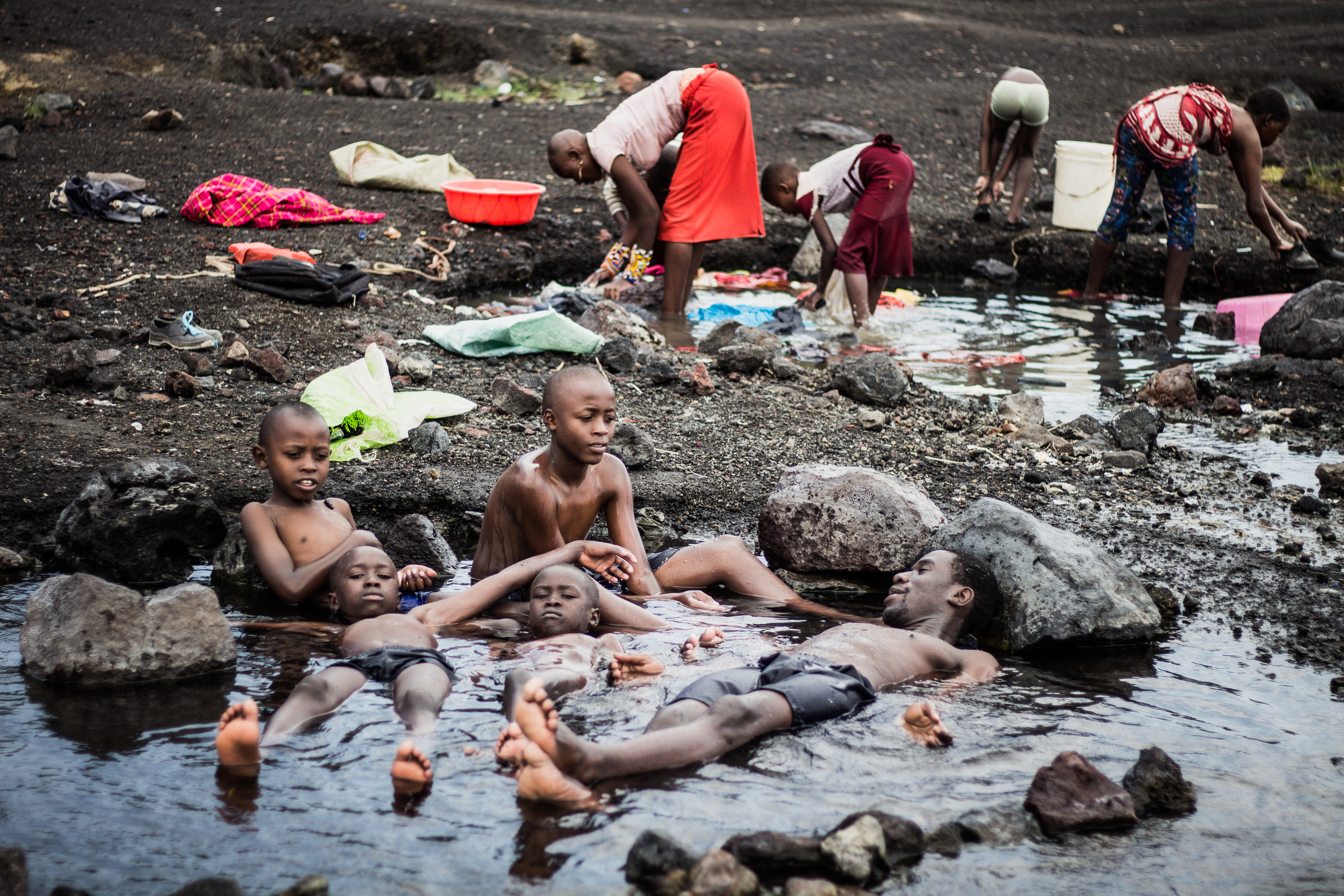 In his early years, Anwar dreamt of leaving Kibera far behind. However, as he grew older and developed as a photographer, he began to see a different side of his home and his community.

He explains, “Growing up, I hated this place. I didn’t understand why people live here. I hated it here. But the older I became, the more I realized that it’s never people’s choice to live in a slum. These people are constantly working towards a better tomorrow. Each day they wake up and keep going. And these people have knowledge that many will never have and that you would never know if you didn’t take the time to talk with them. When I understood that, it became my purpose for living. I decided to dedicate my life to telling the stories that often go unnoticed or are overlooked in my community.”

“And the more I photographed my community, and the wider their stories reached, the more I realised how similar we are all as people. What I am going through here, you may be going through there, and maybe even the whole world is going through what I am in different degrees. We just don’t realise it because we are worlds apart.”

“The moment I share my work and tell the world about what I see, or what is happening here, it gives me a sense of purpose, a sense of being. I think photography is very powerful because of the way it can make you feel. Photography is capable of expressing feelings that are hidden or unexpressible in other ways. It is powerful precisely because of the expression and feeling that it can capture and the memories it can preserve. Perhaps by sharing an image of something that I see or feel, it may resonate with someone else, somewhere else, and they may feel less alone or less desperate.”

However, Anwar is wary of photojournalists who travel to Kibera, or similar locations, tour the settlement and snap pictures. Without necessary context and without building trust with the community, he warns that there is a danger of exploiting those you seek to represent. Indeed, Anwar explains that photographers from outside the community are often treated with suspicion;

“The people in Kibera are very knowledgeable, and they understand the power of photography and what photography can do. If someone they don’t know asks to take a picture, they want to know, why? Where is it going to and what is the purpose? And if you take an image of someone without their consent, you may assume that they won’t see the image, but they will. Somehow through social media, someone will share with someone, and the image will find its way to the subject. We may be world’s apart but we live in a global village and whether in the slums of Kibera or in London, we all have ways of accessing images,” he continues.

“So always approach people with respect. Photography is a tool to express not only your way of seeing, but also the world around you.”

Anwar has his own technique for approaching his subjects. Anwar travels with two cameras. If someone is uncomfortable with the idea of being photographed, he gives them a camera. Once both have a camera in their hands, the power dynamic shifts. Both are photographers, both are potential subjects.

“Holding a camera is a big deal. Growing up in Kibera, it was incredibly difficult to get my hands on a  camera. Cameras are expensive, and when you come from a very poor neighbourhood they are precious. I know that if I give my camera to someone who has never held a camera before, it is going to be something magical, something that this person is never going to forget. You can see it in their reaction. They want to know everything. What the buttons do. What the lens is. How to focus. Everything. When people are given the tools to express themselves, it can be incredibly empowering and exciting. Some people I met this way, have since worked with me and learnt to become photographers themselves. That is why I believe that photography is very powerful politically, economically and even socially,” Anwar concludes.

You can discover more of Anwar’s work here and browse the full collection from This is Gender 2021 here.