Dan Agostini is a photographer and photojournalism teacher based in São Paulo, Brazil, whose powerful series Palomas, Transsexuality and pandemic was named runner-up in This is Gender 2021.

As part of our Representation Matters series, This is Gender curator Imogen Bakelmun connected with Dan to hear more about their winning works, the importance of trans visibility, and the role photography can play in advocacy work. 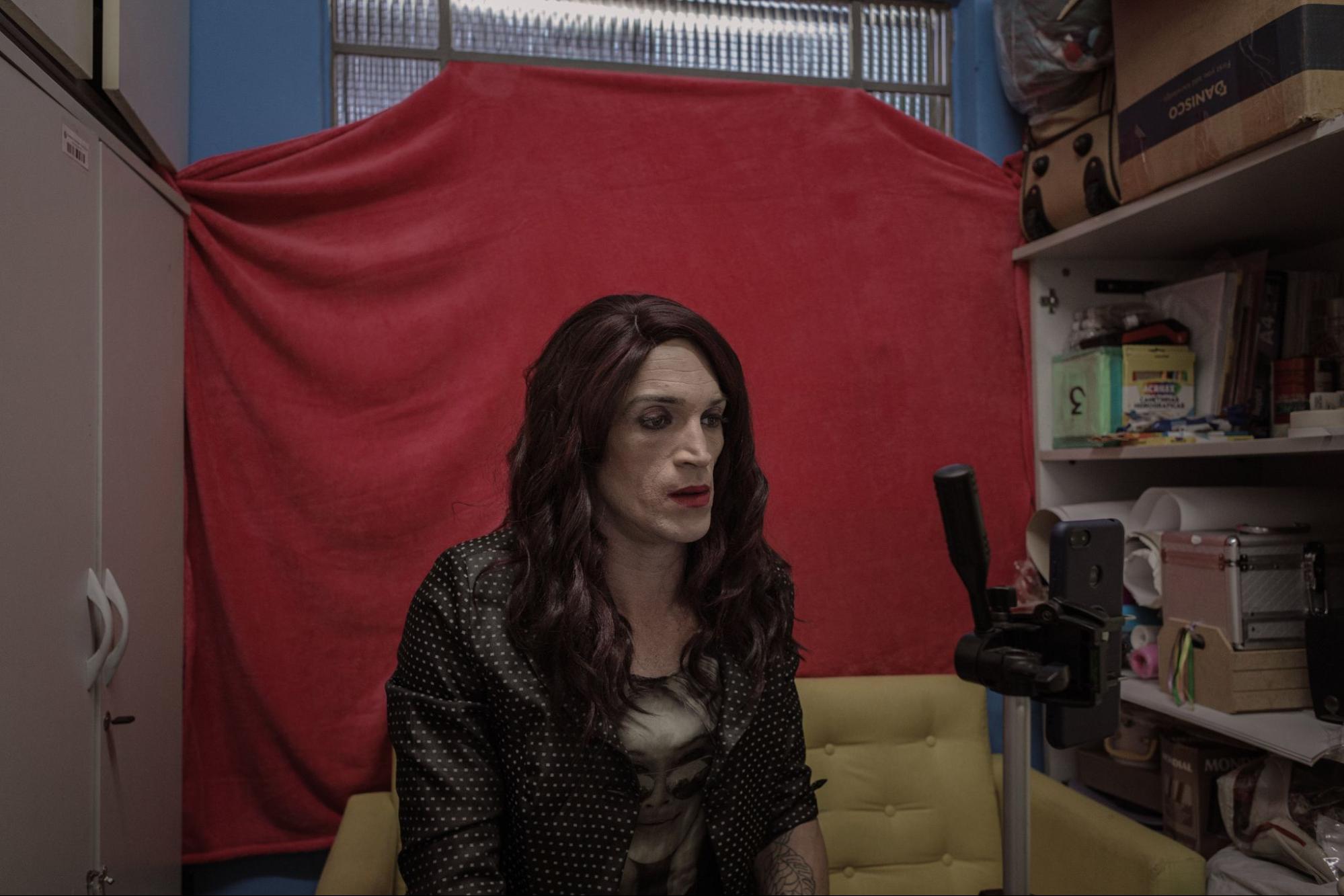 The Palomas, Transsexuality and pandemic series documents the lives and struggles of a group of transgender women living in Casa Florescer II, a government-run support home to elucidate the complex ways the pandemic has impacted their lives. Life for trans people in Brazil has always been dangerous. Brazil is regularly named the deadliest country worldwide for trans people due to the high murder rate of its trans population. And while trans people are legally recognised in brazil, the powerful evangelical church and the social conservative populist government encourage a troublingly anti-trans approach. Discrimination and violence against Brazil’s LGBTQ+ communities are widespread, yet often underreported.

The pandemic has only worsened the situation for trans-Brazilians. Brazil has the second-highest COVID-19 death toll in the world after the US with over 460,000 deaths and the third-highest number of COIVD-19 cases in the world, at an estimated 16.5 million. And as we see globally, it is the most marginalised communities that are impacted the hardest.

Through Dan’s important work, we are offered a snapshot of the various ways transgender people in Sao Paolo have been impacted by the pandemic.

At the end of a dimly lit walkway bordered by makeshift room dividers, Kimberli, Allana and Janaina pose on a bunk bed backgrounded by a pink wall. The room feels claustrophobic. Lit by the sterile light of a fluorescent tube, there is notably no windows or natural light. The ceilings are low. The beds are packed tightly in. In the foreground, a woman’s feet are visible peeping out from her divided section as she lies on the floor to cool herself.  Hands on hips, faces forward, Kimberli, Allana and Janaina meet our gaze. 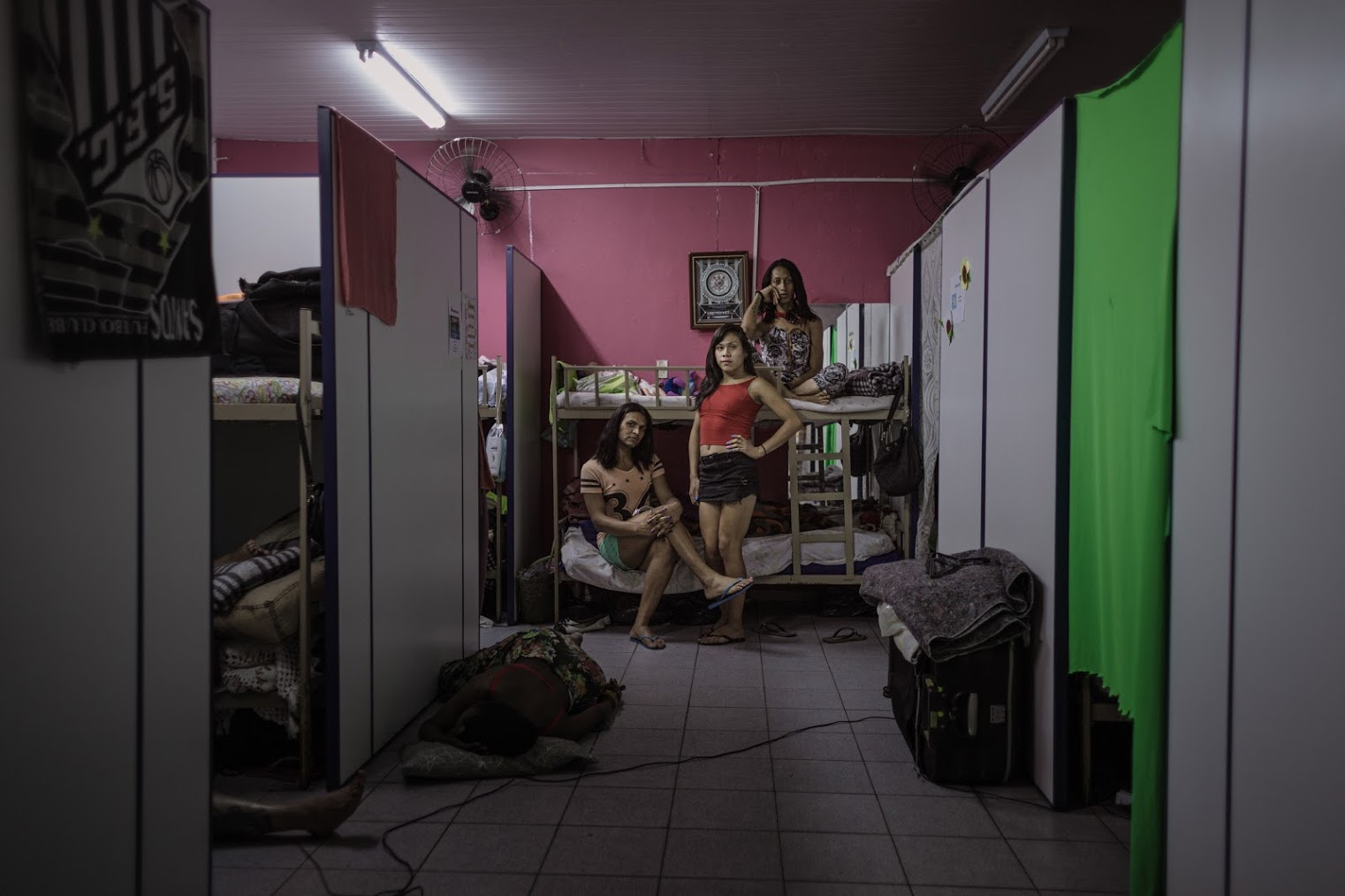 Dan visited this room many times throughout the six months of the project and was troubled by the conditions in which the girls lived. They describe, “Thirty women live in this one small room. There is no ventilation system and definitely no space to social distance. I used to visit twice a week to talk through the project, to hear their stories and to teach them about photography in informal workshops. I wanted to build a more horizontal, less hierarchical relationship with them, so it was important for me to go to their space, to where they felt safe. Slowly we built trust, but I was troubled by their living conditions.”

“Janaina’s bed is in the centre of the frame, each time I went there, she was always on her bed on her cellphone. I would sit with her, but the room was so hot. This image was taken in the middle of summer in São Paulo – the heat was suffocating. Despite the obvious risks of contamination and infection, for these girls, like so many other trans people in Brazil, a government-run support home is the safest place to be. Many of the girls are really young and forced out of their homes due to discrimination and fear. It’s not surprising that cases of coronavirus are high among trans people when their safe space is so risky.”

Janaina, captured in this image, was arrested shortly after leaving Palomas after an encounter with a transphobic bank teller who wouldn’t accept her request to open an account. Janaina already had a criminal record for dealing drugs when she was younger and had already spent two years in prison. She was sent to a male prison. Her hair was shaved, and her identity denied. Her second time in prison, surrounded by men, was dangerous and violent. 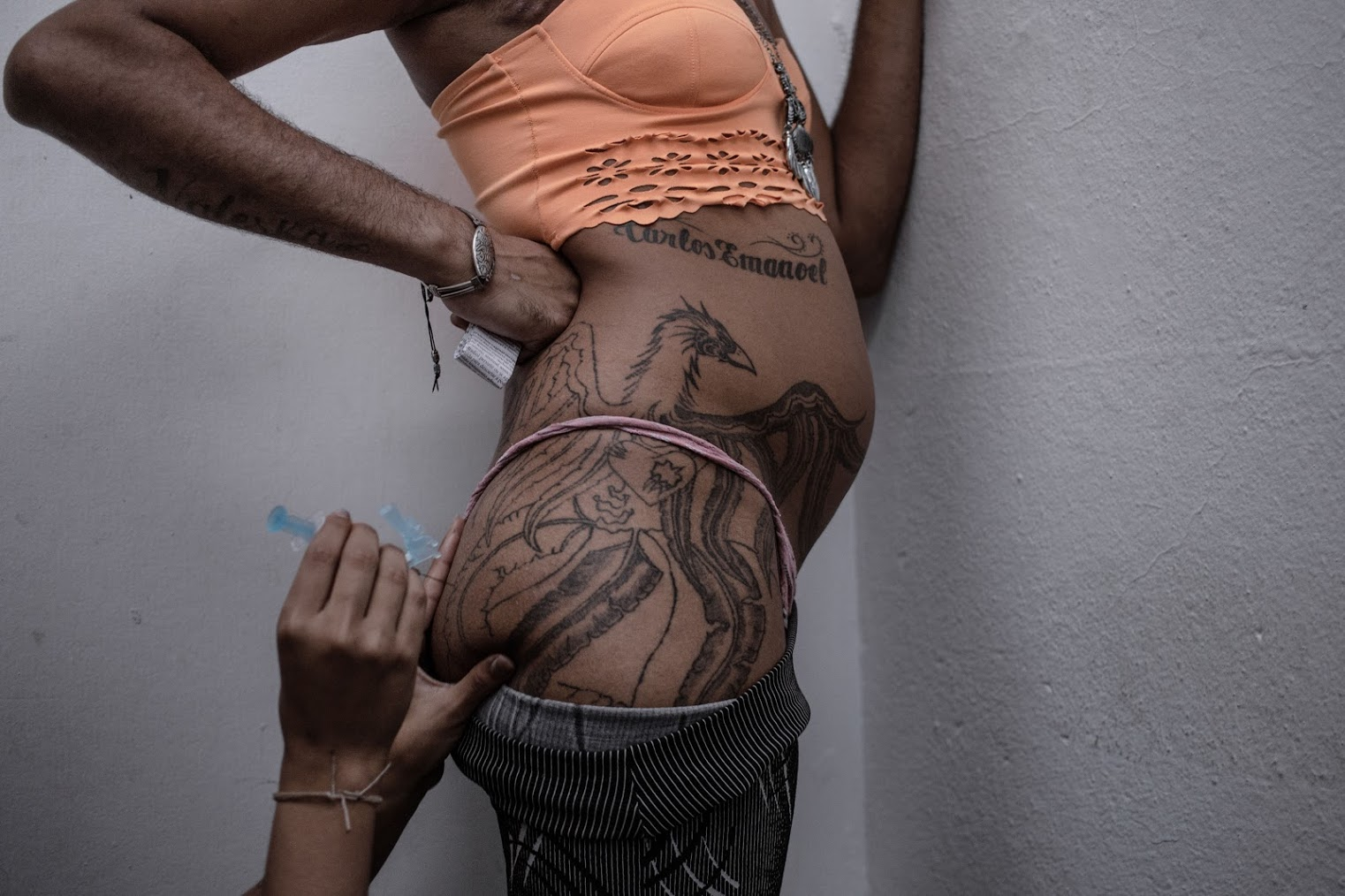 Celina injects Stefany with female hormones in a bathroom in Casa Florescer II. The moment is commonplace among the girls. Dan explains, “It is difficult for the girls to receive regulated medical care. Feminization treatments in public health units are really expensive and require a lot of bureaucracy and documents. There are certain requirements for receiving gender-affirming care, like approval from a therapist or proof of dysmorphia or consultations with endocrinologists. These things can take a long time to come through and can also be expensive- and in the meantime, they are forced to live in a body that doesn’t fit them. So, they seek alternatives, backstreet medical practices like hormone injections or industrial silicone injections by each other or unlicensed practitioners. It’s dangerous. So many trans-Brazilians get silicone injections, but the consequence can be fatal.”

In Brazil, backstreet silicone injection, also known as ‘pumping’ is a growing industry. Cheap, quick and easy to come by, it is a particularly popular practice among trans people for its promise of delivering curved, feminine hips, breasts and buttocks. For trans-women who want to feel at home in their body, it is a tempting solution. But unlike medical-grade silicone commonly used in cosmetic surgery, the liquid silicone used by unregulated, unlicensed ‘pump’ doctors can be commonly found in hardware stores. Studies have even found such injections to contain olive oil, paraffin wax and even transmission fluid for cars.

Liquid silicone can spread via the lymph nodes and impact the immune system, can cause dangerous infections and tumours, calcify of the joints and limbs and can lead to amputations, disfigurement and even death. “The girls know it isn’t regulated, and they understand the risks but it still somehow seems the better option, not only because of its immediacy and its price, but also because it is a way of avoiding the hospitals,” Dan explains.

“Since the start of the pandemic, lots of the trans-health services have stopped. If the girls want to receive hormone therapy or surgery, they have to go through general hospitals and this can be a traumatic experience. For most medical services, you need to present a formal ID, however, some of the girls don’t have ID because they have been living too long on the streets, while for others their ID doesn’t reflect their gender identity. For example, when Janaina and Stefany were released from prison they both had STDs. But when they sought care they were misgendered and misnamed on purpose. They don’t want to be in those spaces or have those types of encounters.”

“And even those who are willing and able to pay the full price for gender reassignment surgery, and happy to go through all of the steps, the waiting list is over 7 years long. It’s too long.”

Working in times of pandemic

19-year old Celina and 21- year old Barbara wait for clients on a quiet street near to their home. As Celina watches the passing cars, Barbara lights a cigarette. The street is dark, there is no one around. 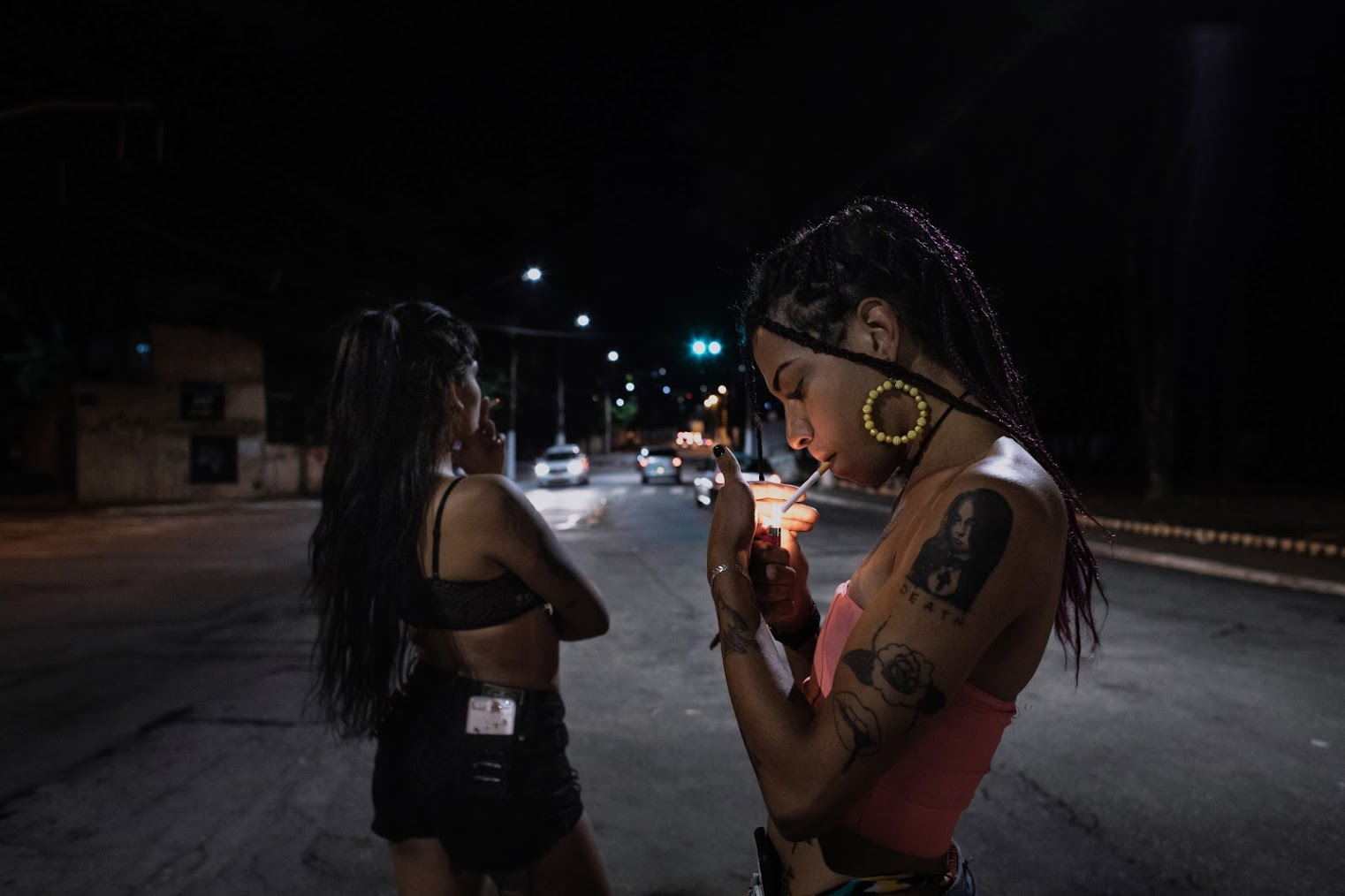 Celina and Barbara are sex workers. “Celina is beautiful, she dreamed of becoming a model,” Dan explained, “She is from the north of Brazil, but came here to São Paulo when she was only 15 years. After living in a support home, Celina moved in with some other girls into a house with other trans sex workers. She is resigned to her work, it’s not her dream, but in her mind, there aren’t other solutions. Barbara struggled with the work. She is a lesbian, she likes women, but her work is mainly with men. She wanted to be a tattoo artist but it didn’t work out, after that she tried to sell sweets but couldn’t earn enough to support herself. Sex work was the last resort for her.”

“In Brazil, as elsewhere, transgender people have issues with working. They don’t have the same options. It’s complicated. Brazil is a country with high rates of poverty, our society is poor, so for a transgender woman who doesn’t have a formal education, who doesn’t have the support of her family, who has perhaps had to live on the streets or move from support house to support house, they just aren’t considered in the formal labour market. Sex work is one of the few economic options for these girls,” Dan continued.

Indeed, TransVest (a local non-profit for trans women) estimates that around 90% of trans women in Brazil work as sex workers while only 6% work in the formal labour market due to social prejudice and discrimination. And the situation is worsening, a survey published in June 2020 revealed 25% of LGBTQ+ Brazilians lost their jobs during the pandemic, pushing joblessness among LGBTQ+ Brazilians over double the joblessness in the rest of the population. As Dan stated, “for us, the pandemic is not only a health crisis, it is an economic crisis that disproportionally hurts the most vulnerable in our society.”

“And the economic crisis and health crisis are connected. Of course, sex work poses a significant risk to exposure to COVID-19. It’s impossible to social distance in sex work, and PPI is obviously not an option. The girls risk infection every time they go out.”

The global pandemic has also exacerbated the violence epidemic against trans-Brazilians. In 2020, 175 trans women were murdered in Brazil, a 41% increase over the previous year. In São Paulo alone, there were at least 29 murders, an increase of 38% in relation to the previous year, within which 72% of the murders were of transgender women sex workers.

In a year when the trans community is facing increasing socioeconomic vulnerability, measures of social distancing, curfew and quarantine, have also led to a significant increase in deaths.

Dan explains, “The girls were more nervous working during the pandemic. The streets were emptied, there were few people around, so they become an easy target. There is always violence, I saw evidence of violence every day, but during the pandemic, the girls were out there on their own. The location of this image is a spot the girls often worked. It is very close to the support house, near a small park. Because it was close the girls would often go. One week after this image was taken, some guys who were walking around beat up some of the girls from the support house, and stole their money and phones. Sadly it’s not an uncommon occurrence.”

Through Dan’s series, an intimate image of life in the pandemic for trans-women in Brazil emerges. Moving between the images, we are afforded an insight into how their lives, contoured by work, violence, discrimination, homelessness and refuge, backstreet medical practices and economic destitution.

As Dan explains, “I wanted to bring visibility to this community, because visibility is needed. Health, education, work, the lack of safe spaces- we need to talk about it all. Things in Brazil are changing, but the change is too slow. This project took place in São Paulo, the centre of the country, if we have all these problems here, imagine what it must be like in the rural North or South.”

Dan is currently continuing her work with the women and has been able to employ several of the women to help her with other photographic and teaching jobs.