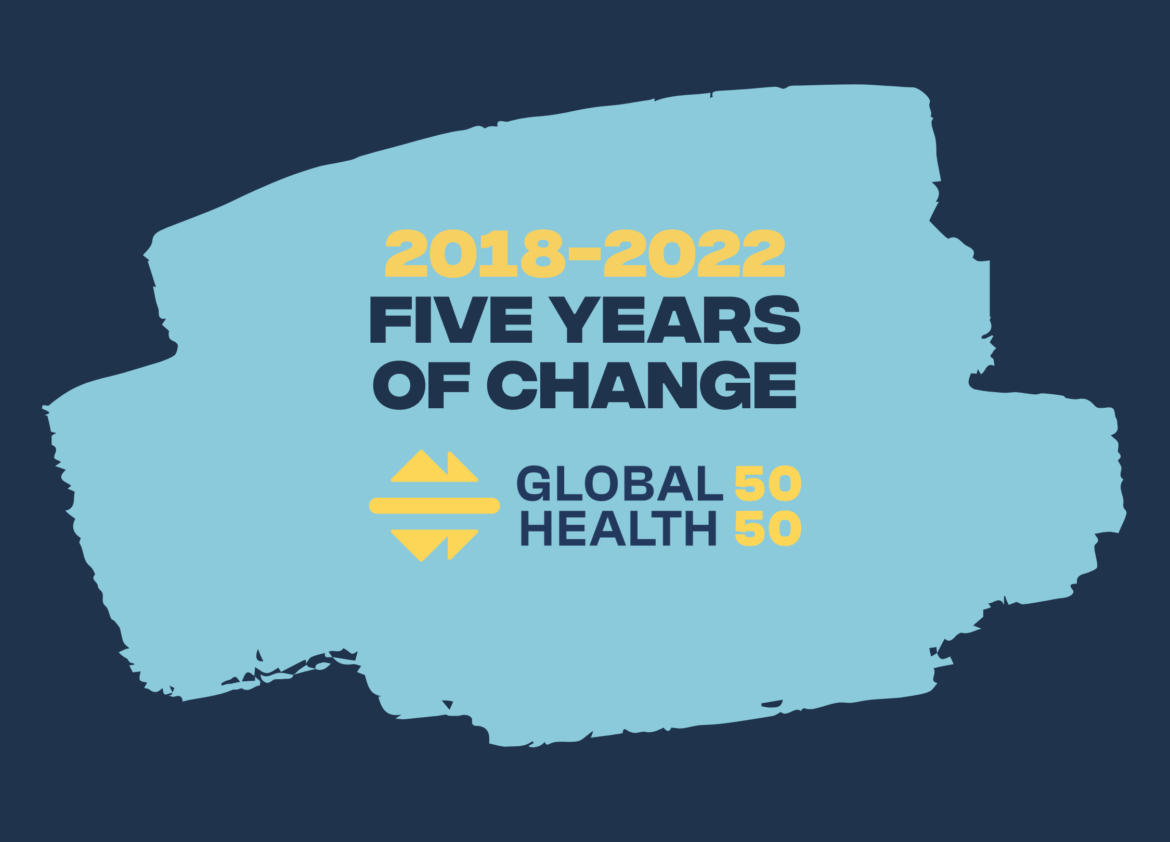 Established in 2017, Global Health 50/50 (GH5050) turned five this year. In those five years, we’ve achieved big things with a small team. We’ve produced five annual reports which have built the most comprehensive repository of data on gender-related policy, practice and career outcomes in the global health system. We’ve partnered with other research initiatives to produce the COVID-19 sex-disaggregated data tracker (cited around the world) and the first ever country-level report on gender equality in Nepal’s health organisations. We started the This is Gender photo competition to deepen and diversify gender imagery in global health. Since 2020, GH5050 has been mentioned in the media on average every 3 days.

What we’re most proud of, though, is the work we’ve done in partnership with organisations across the global health system to drive positive change for people. Organisational commitment to gender equality has measurably increased and so have the policy environments to advance these commitments – with many organisations attributing their changes to GH5050 evidence and advocacy. We’ve measured these changes in two ways: our Gender and Health Index has monitored the progress of 140 organisations since 2018; and organisations assessed in the report recently provided feedback in an anonymous survey we commissioned.

Our Gender and Health Index shows:

The GH5050 Report has led to changes in global health

Nearly 9 out of 10 respondents agreed the GH5050 Report provides important evidence on how the global health sector is performing and progressing on gender equality in workplaces and external programmes. A majority of respondents agreed that the report is effective in promoting organisations across the global health sector to 1) take concrete actions in the workplace on gender equality, diversity and inclusion (78%) and, 2) integrate gender-responsive approaches in their programmatic and external work (64%).

Some organisations have made changes to the transparency of their efforts to improve gender equality:

“While the GH5050 Report has not changed any of our policies it has encouraged us to ensure our gender related policies and procedures are publicly available.”

Some organisations are reviewing their work on gender equality:

“Prompted by the GH5050 Report, we are reviewing our gender approach and strategy towards becoming gender transformative.”

While other organisations are going beyond their own workplace to support gender equality through collaboration:

“Inspired by GH5050 my organisation has also been leading a dialogue with similar public-private partnerships to understand the specific needs of research and product development organisations.”

We’ve also received some valuable feedback on how to improve our research and impact and we’ll be integrating some changes into the 2023 Report. We hope that organisations will continue engaging with us in a shared journey of learning and positive change.

We commend all organisations for the changes big and small they have made towards greater gender parity in leadership and senior management, more diverse and inclusive workplaces, and gender-transformative health programming. We encourage organisations who haven’t yet taken steps towards gender equality to review our resources and make one small change today. These changes contribute to more equitable workplaces in the health sector and improved health outcomes for all. We look forward to even greater changes in the next five years.