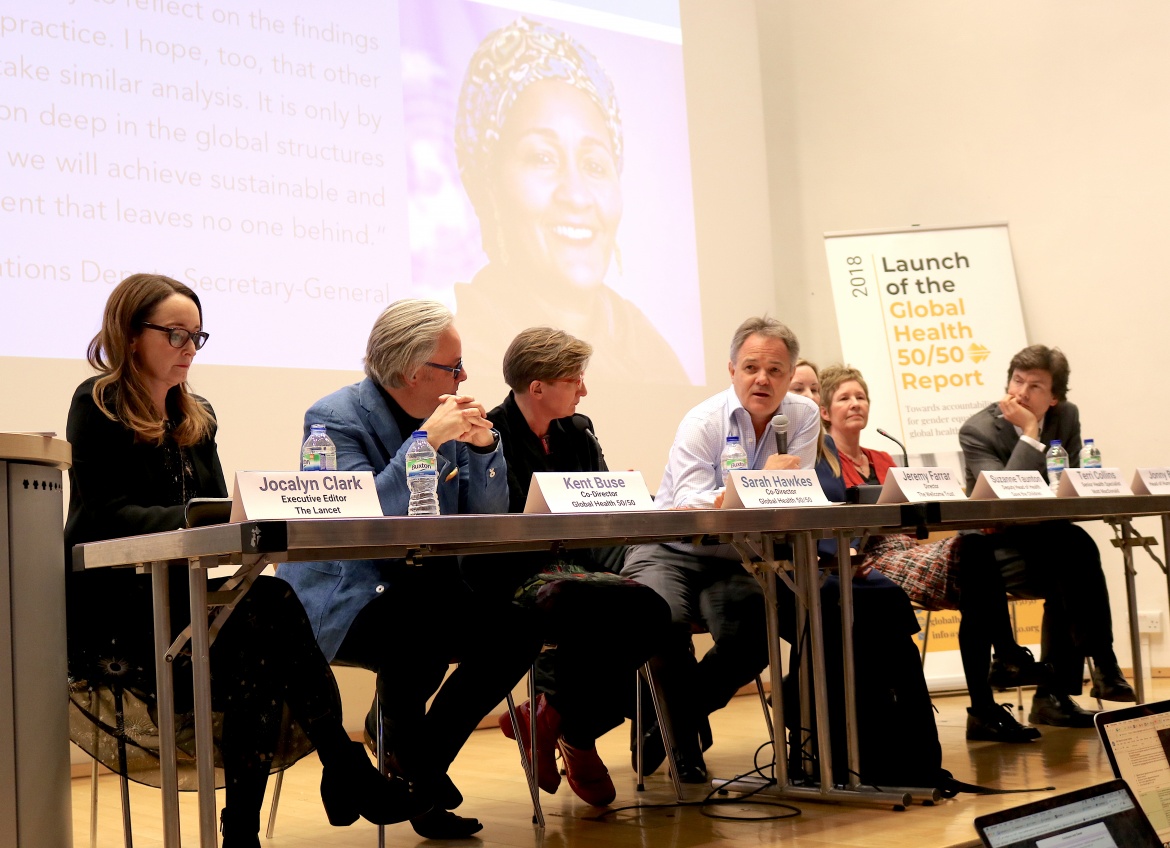 At 1 am after International Women’s Day I was trying to get to sleep in my Nairobi hotel. But my mind was racing after watching the exhilarating launch of the Global Health 50/50 report via live stream. Suddenly the phone rang; the Global Health 50/50 team’s collective voice reveling in the post report launch flowed through the speaker. There would be celebration and then, for the first time in months, a weekend off!

The report launch was hosted by Dame Nicola Brewer, Vice Provost of University College London, and the findings of the inaugural report presented by Dr Kent Buse and Prof. Sarah Hawkes.  An interactive panel discussion followed, moderated by Jocalyn Clark, Executive Editor of The Lancet, where Jeremy Farrar, Director of the Wellcome Trust, Jonny Baxter, Head of Human Development, DFID, Terri Collins of Mott MacDonald and Suzanne Tauton from Save the Children UK, reflected on what the GH5050 analysis and recommendations mean for the global health community.

You can watch the full launch event here.

In the days following the launch, we have seen organisations welcoming the report and global health leadership publicly committing their agencies to do better. Gavi, The Global Fund to Fight AIDS, Tuberculosis and Malaria and UNAIDS put out statements in response to the report. Civil society—that as a sector did particularly poor on workplace policies for gender equality in the GH5050 analysis with 70% lacking such frameworks—has launched the #NGO5050 call to action to ensure organisations commit to gender equality and equity in the workplace through 10 key actions.

The report sparked critical reflection and commentary on the state of play of gender in global health including: Andrew Jack in the Financial Times, The vast gender gap in health; Helen Clark’s comment in the Lancet, Report card shows gender is missing in global health; a Lancet Global Health commentary, All gender inequality is not equal; and a news update in the BMJ, Many global health organisations fail to act on gender equality.

To coincide with the report’s launch, Swedish State Secretary for Development Cooperation and Global Health 50/50 Advisory Council member Ulrika Modéer published an op-ed titled Global Health Organizations must do more for gender equality in the leading Swedish online fora for debate on development cooperation. She stated that Sweden’s feminist government will expect to see progress next year from the global health organisations the country funds across the seven domains included in the analysis.

While we are cautiously optimistic given the positive response to the GH5050 report, as with any accountability initiative, we must look beyond the report. We are now deploying a systematic policy engagement strategy on transparency, internal accountability and commitment to organisational change for gender equality and action in global health. It is the only way to make sure the ‘new line in the sand drawn by Global Health 50/50’, as so eloquently described by the Lancet’s Jocalyn Clark at the launch, becomes one that global health organisations simply cannot cross.

With dedicated action, we want to fast forward the pace of change across the seven domains explored in the report. This is how we put the report to work:

If you want to collaborate or have other ideas of how we can make sure this becomes a tipping point for gender in global health, get in touch. The time is now.