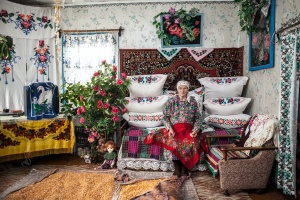 Andrei Liankevich is a documentary photographer from Belarus and winner of the This is Gender Photography 2020 competition. His image graces the cover of our 2020 report Power, Privilege and Priorities and was praised by the judges for its aesthetic balance, tonal composition and intimate insight into the ageing population in Belarus’ rural villages.

As part of our Representation Matters series, we sat down with Andrei to discuss his winning image, the role of photography in documenting and preserving cultures and why he thinks images are key to initiating dialogue and discourse.

The image belongs to your Belarus series and I wonder whether you could speak a little bit about this broader project and what drew you to this topic.

The project started almost two and a half years ago in the frame of the “Unseen”project by Goethe Institute Milano, and sought to capture the rapidly disappearing traditional cultures of Belarus in light of globalisation and urbanisation. Belarus has changed drastically in the past 50-60 years. Where before more than 60% of people lived in the countryside, today the majority of people live in the cities.

As people have moved from the countryside into cities, much of the culture, foods, practices and daily rituals were left behind. Nowhere is this clearer than in the interiors of houses. Family pictures, icons, traditional folk embroidery that once typified houses in Belarus are slowly being replaced with a sleeker, more modern, more global design. The history that was once presented on the walls is being destroyed.

As a documentary photographer, I was trying to preserve this culture. In a time when technology has made it possible to produce pictures from everywhere, this image of culture is really missing. We have 5-10 years to preserve the culture before it completely vanishes.

The interior design of the room was one of the things that many have commented on, and we have been contacted by quite a few people who say that the house looks just like their grandmothers. How did you come across Maria and what drew you to Maria as a photographic subject?

10 years ago I was working on a photography book about traditional cultures in Belarus. Over three years, I captured spiritual practices all over Belarus. In Belarus we have a special place, it’s called Polesia between Poland and Belarus- a huge swamp area. Even in the 60s it was really remote. People used boats to come from the villages to the city to sell their produce in the markets. It’s a bit like Venice in Italy but without real connections to the broader world and because of this isolation, many of the local traditions and spiritual practices are still preserved. That’s why I keep coming back to this area to photograph and communicate with people.

It was in this area, Polesia, that I met Maria [the subject of the photo].

So it seems that you invested a lot of time in getting to know your subjects. How important is it to you to build a relationship with your photographic subjects?

Without knowing people, it’s hard to enter people’s homes and to photograph them. You need to get permission, or trust rather. It’s so important to communicate with people and to build trust. Within the past 10 years, I have built real relationships, real friendships, with locals.

In particular, I became close with Katerina Panchenia, the head of a folk music band and the head of the local cultural palace in Pagost village. She is 80 years old and we developed a very close connection to each other based on friendship, love and respect. She is trusted by locals so she opened lots of doors for me and accompanied me on my photographic trips to the houses.

With her I was given access to situations I wouldn’t normally have been able to see. This is why the pictures are so honest and direct, you can see from the pictures they’re not decorated. People were not prepared for a photographic session, they didn’t have time to get dressed up and make themselves look really nice, like Maria.

So Katerina introduced you to Maria. What was the actual encounter with Maria like?

She was shocked, initially, it was all very quick. Maria was cooking at the moment and we just came into the house. She was wearing a normal dress, the traditional attire, and she sat down on her bed and I took the picture within 10 minutes.

On the floor you can see the corn. She was drying corn during the winter for springtime, for the chicken. It’s a very common sight, but hidden for non-close people. A person like me, wouldn’t normally encounter this kind of scene. So it was a great opportunity to capture how people really live, day to day, without any sensationalising or touch ups. And that is incredibly important. It’s really direct photography.

We loved the way the image is framed, as though Maria were sitting on a throne with her hands laid neatly on her lap. How did you decide on the framing and pose for the image?

Her fingers are curled in arthritis. Traditionally, women wash clothes and linen in cold water. It’s tough work, in traditional practices linen must be really white, so during the winter you clean it in ice water and of course, over the years it takes its toll. The white linen crafts that surround her and flowers and ornaments are the result of the hard work, and her arthritic hands are the price of beauty that surrounds her.

In your description of the work, you explained how women in Belarus outlive men and that a woman living in older age on her own is a common occurrence and that older women are the keepers of the culture, but you were hesitant to use the word empowerment. What story of gender do you think your image tells?

What I wanted to underline is that the order of things is normal for them. In traditional Belarus culture, women are more powerful than the men, they take more responsibility. First of all, because of historical aspects, there were two big wars which killed half of the male population. At this time, women had to become the centres of the family and take all the responsibility for the family.

Lots of the men who did come back were seriously injured, returning without arms and legs and struggled to cope with normal life, developing drinking and psychological problems- the women had to become strong. So, this proved to be a huge moment for women in Belarus. Women became the most important in society. They had no choice but to become the centre of family life.

So for older women, it’s common for them to continue working hard. For example, with the corn, she is more than 70 years old but she is still working hard because she is used to it. That’s why I think it’s not suitable to frame Maria as an independent woman, in this context it’s better to speak about lifestyle. Today, we privilege concepts like self-realisation, self-love, feelings, empowerment but these aren’t really concepts for these women. There’s no space for feelings, their lives are filled with their work and responsibility.

But, it’s paradoxical. We are still very much a male-dominated society. Only men can hold power, the man is the boss. The president for the past 25 years, all heads of big cities are men, I don’t think we have any female authority figures in politics in Belarus. But in daily life, women are the boss. People always think that women should take the responsibility instead of the family and house. It’s one of the myths through which we live.

Context is essential and it’s so interesting to hear about the historical processes that have informed gender roles in Belarus. These different stories of gender are precisely what we hoped to produce. We started this competition because we found that there was a lack of images that were reflective of the full diversity of gendered experience. We tend to have a very narrow lens through which we see the world. We wanted to generate more images that could speak to diversity. As a photographer, do you feel a responsibility to offer different perspectives?

Firstly, I think the Western focus on gender, the way we see gender in the West is something to be challenged. Lots of images in the competition, say from photographers from India, have multiple genders, not just a binary construct. It’s not a question of one or another for them, there’s a spectrum of gender and this is a really important thing to emerge from this competition. Sometimes, we need to question our lenses and ways of seeing and experience new ways of perceiving things.

Pictures can be a unique and very direct way to start discussion and communication.   Images are a visual language. It functions differently from communication through words, but it can incite conversation. And dialogue is essential, when we speak to each other we get new perceptions of the world. With complex, philosophical and intercultural topics like gender, dialogue is even more essential.

Your competition is very direct and unique because it collects images from all over the world with different gender understanding and through them you can start to have this very complex conversation across cultures.

Absolutely, redressing our gaze and questioning the thoughts and ideas that frame our understanding is essential. Images are great communicators that can speak across language barriers and capture things that are sometimes difficult to express. How do you navigate, as a photographer, your own feelings and thoughts about a subject in your photography? How do you decide on the framing of your image?

The picture is always done in my mind. In all of my projects, the image is just the end of a long process of analysing, collecting information and deciding on the pictorial language to illustrate my idea. That’s why the picture is already done before I come to actually take the image. It’s not about being disrespectful to the subject, but I am there to document a situation and as a photographer, I have to think about how to present it. I choose the flash to underline the colours, I choose the aesthetic, and craft the image.

As the winner of the competition, your image is on the front of our 2020 report Power, Privilege and Priorities, and it’s an image that isn’t commonly seen on this kind of product. What do you hope people will take away from your image when they read the report?

I hope this picture will show how important traditional human relationships are. When we talk about development, we need to stop this process of constantly driving forward. We need to look around and speak to each other, slow down and come back to the roots of our cultures.

Explore the collection for This is Gender.