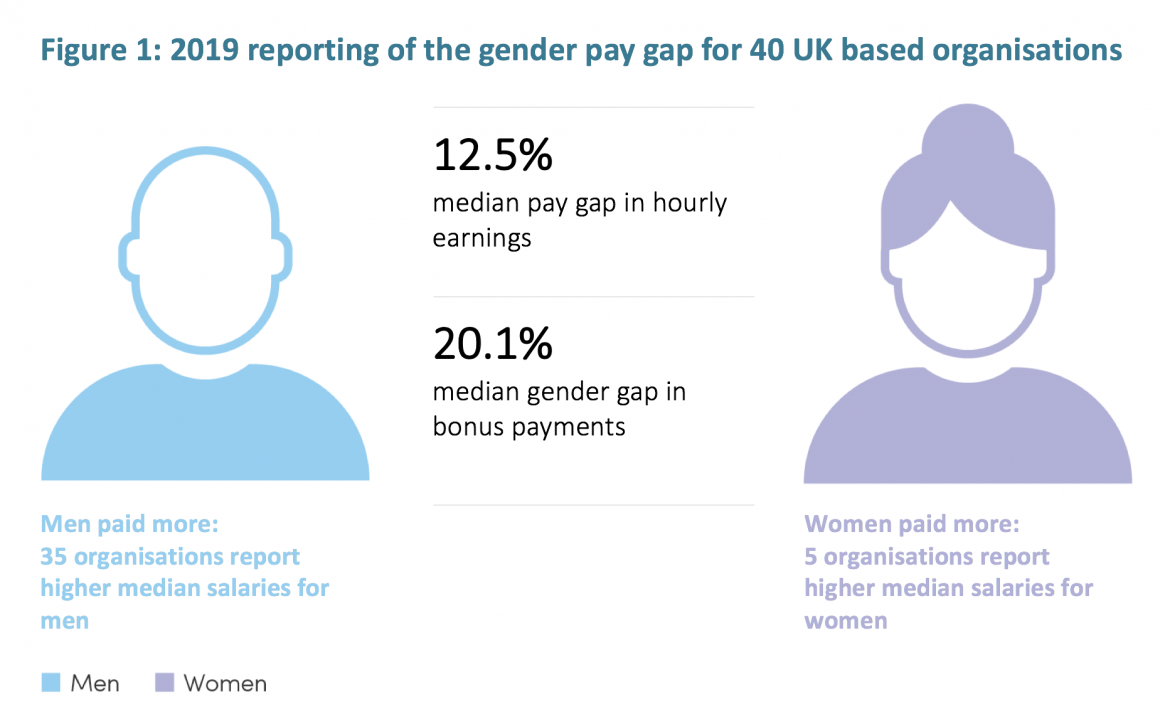 Previous item Translating the GH5050... Next item From the Global Health...

By law, organisations in the UK with 250 employees or more must submit their gender pay gap data to the Government of the United Kingdom and publish their results on their own public-facing website. The hope is that greater transparency will spur collective action to close the gap. As the deadline for reporting data for the 2018/19 figures recently passed, we wanted to check in and see if there had been any change in the figures of the UK-based organisations included in the Global Health 50/50 2019 sample. But before we get to the data, let’s be clear about what the gender pay gap measures.

The gender pay gap is the difference in the average hourly wage of all women and men in an organisation or across a workforce, as monitored by the Sustainable Development Goal indicator 8.5.1. Employees include those on part-time contracts and some self-employed people. In general, if men hold more of the better-paid posts than women, the gender pay gap is usually bigger. In the UK, employers are required to report not only on gender pay gaps, but also on the proportion of men and women in each pay quartile.

The gender pay gap represents the spread of men and women across the levels of an organisation. This is not the same as unequal pay, which is paying men and women differently for performing the same (or similar) work. Unequal pay is prohibited in some 64 countries, which include the headquarters location of nearly 90% of the Global Health 50/50 2019 sample of organisations.

The Global Health 50/50 2019 Report, Equality Works, reviewed the gender pay gap data reported by 41 of the organisations in our sample for the 2017/18 reporting cycle. Forty organisations also reported for the 2018/19 cycle (General Electric did not report for 2018/19). For this reason, we decided to rerun our 2017/18 analysis with the 40 organisations reporting for both cycles.

It has been widely reported that a number of businesses and organisations have reported an increase in their gender pay gap figures for the 2018/19 reporting cycle. While shining a spotlight on these gaps is an important tool to spur action, these results affirm that there are no quick fixes.

In order to address the full range of structural inequalities which limit the potential, pay and power of our workforces, it is essential too that in the UK and worldwide we push for transparency and action across the many diverse drivers of inequities. Gender is just one of these. Applying an intersectional lens, a term coined by scholar and civil rights advocate Kimberlé Crenshaw, helps us to understand how multiple forms of discrimination can occur simultaneously. To reveal the intersectional reality of the pay gap, organisations should disaggregate the gender pay gap by other identifiable characteristics relevant to the context such as race/ethnicity or disability status, to analyse whether specific groups may be facing multiple disadvantages.