Much of the global health sector agrees that gender norms play a crucial role in perpetuating disparities in the distribution of the burden of ill-health across and within populations, and gender influences how organisations address the problem(s). Some organisations in our sample are among the global pioneers in analysing, understanding and working to transform the power dynamics and structures that reinforce gender-related inequities in health outcomes. We would therefore expect that the policies and programmes across organisations to be fully gender-responsive. We find, however, the strategies global organisations adopt to advance health range from addressing the underlying structural (e.g. economic, legal, political, cultural) drivers of gender inequality to those that ignore gender altogether.

Over the past year, progress has been made in the reduction of gender-blind health approaches. Simultaneously, strategies, programmes and approaches that use a gender-transformative framing have increased by 10%. Recognition of the role organisations can and should play in addressing the root causes of unequal gender norms and power relations to advance health equity appears to be on the rise.

A total of 39% of organisations (77/200) promote transformative approaches in their health strategies. 25% (19/77) of these organisations focus on women and girls as the primary beneficiaries, while the majority address gender norms as drivers of health for women and men, girls and boys.

Recognition of the role organisations can and should play in addressing the root causes of unequal gender norms and power relations to advance health equity appears to be on the rise.

An additional 46% (92/200) of organisations were found to be gender-sensitive or -specific. Gender-sensitive approaches (28 organisations; 14%) recognise gender norms, but do not propose remedial actions to address gender inequities in health outcomes. Gender-specific approaches (64 organisations; 32%) take gender norms into account, usually by targeting a specific group of women or men to meet certain needs. These organisations stop short, however, of addressing the underlying causes of inequities and fostering progressive changes in the gendered power relationships between people. As such, they are not considered gender-transformative.

Of the 169 total organisations (85%) with strategies found to be gender-responsive to some degree, nearly half (81) were primarily focused on empowering, enabling and meeting the needs of women and girls. None focused on primarily meeting the health needs of men. Just over half (88) were found to be gender-responsive to meet the needs of both women and men, and 21 specifically mentioned the health needs of transgender populations. 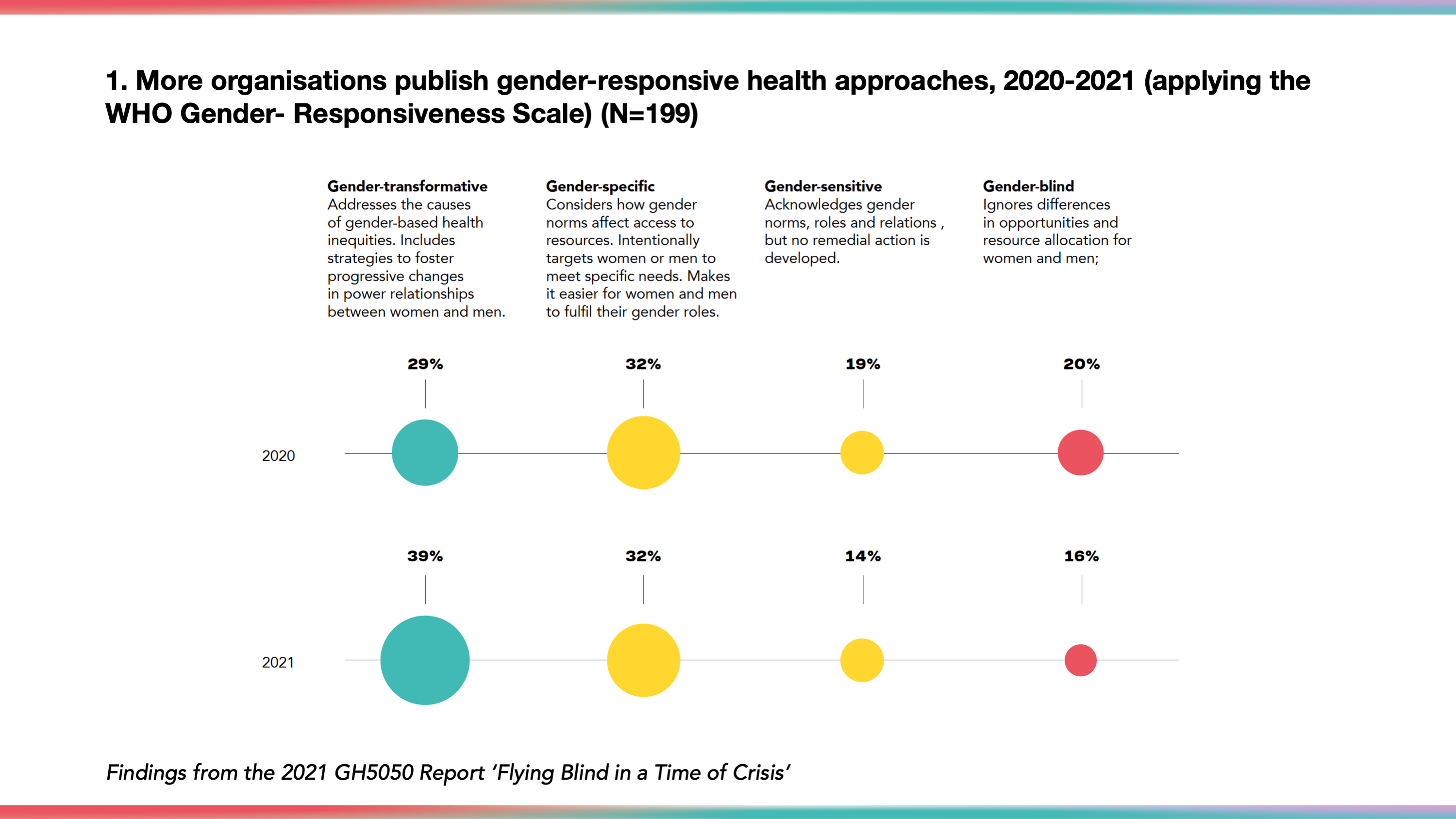 Examples of gender-transformative language from organisations

“Changing ‘business as usual’ is vital in order to reach men with HIV-related services while advancing gender transformative and responsive programmes... Urgent action is needed on two fronts. The first is challenging the harmful gender and social norms that discourage men from seeking health services and behaviours (such as violence and non-use of a condom) that increase the likelihood of HIV transmission to women and girls. Second is ensuring that health system policies, programmes, and service delivery adequately address the HIV-related needs of men in all their diversity. All interventions need to be coupled with broader approaches to realise gender equality – including women’s and girl’s empowerment and challenging structural patriarchal barriers.”

“All SUN Movement actors need to reorient their work, to translate their gender equality and empowerment commitments into action and results at the country level. Our goal is a world free from malnutrition – transforming gender inequalities and power structures is critical to achieving this goal.”

Scaling Up Nutrition, A Call to Action

“In that way, ultimately, a gender lens enabled us not just to address the needs of women pharmacists, but in fact to create better outcomes for both men and women and a stronger pharmaceutical sector for the country.”