Definitions matter. They shape how we think as we move through the world on a daily basis, and they inform the decisions we make. Gender and the distribution of power in gender relations affect all interactions and decisions, from the household level up to the operations of transnational organisations. Gender relations are frequently unjust and unequal as a result of entrenched power relations. Until this is articulated clearly in organisations’ definitions of gender, efforts to address gender equality will continue to pay lip service.

Understanding gender as a social construction (rather than a biological trait, for example) allows us to see the ways in which gendered power relations permeate most parts of life, and begin to address the distribution of power across and within societies, institutions and organisations.

39% of organisations (79/201) define gender in a way that is consistent with WHO’s global definition (see glossary).

The proportion of organisations that define gender in line with global definitions on their websites or in their strategy documents has increased since 2018, from 31% to 40% in 2021. 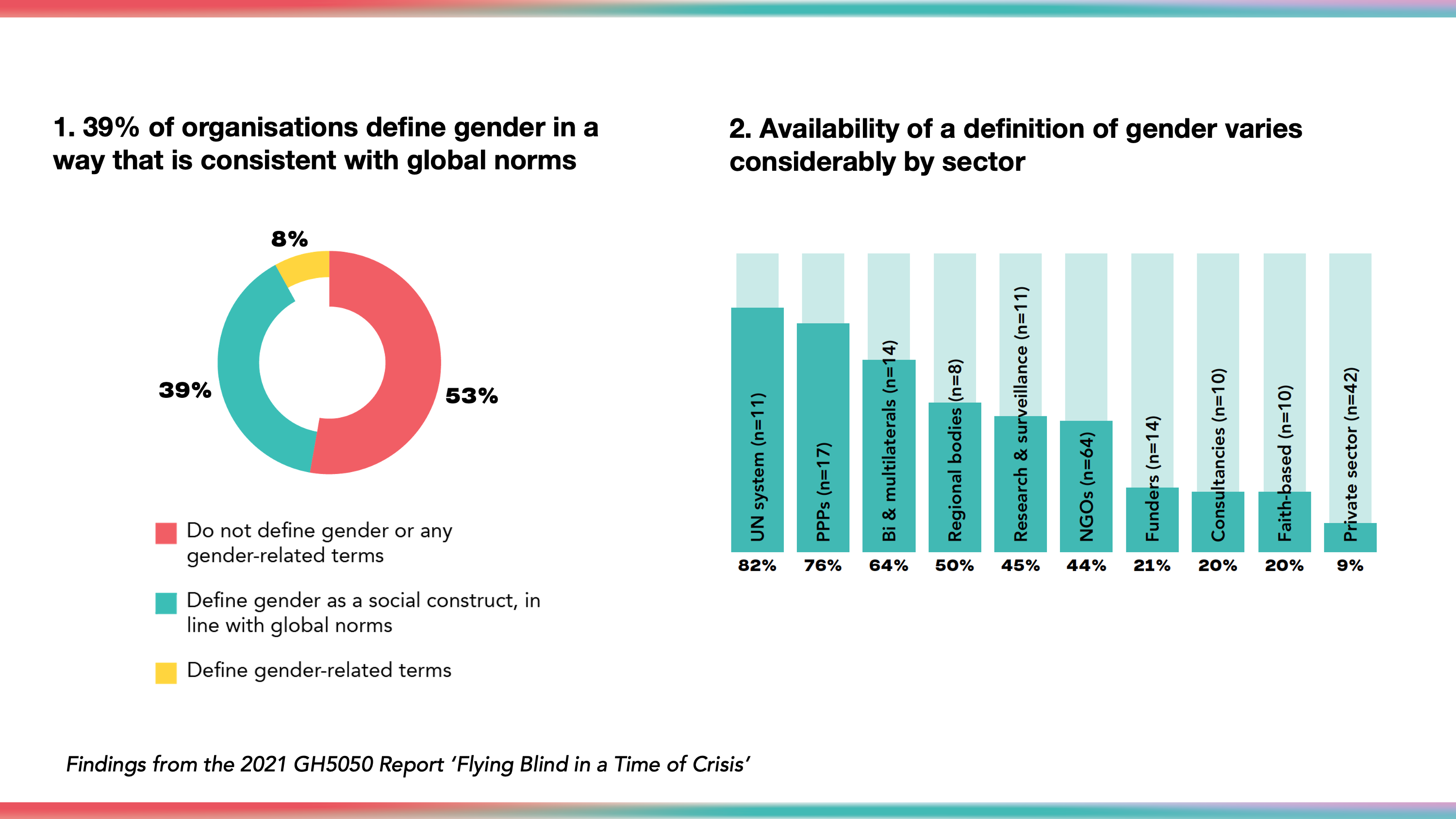 Examples of organisations’ definitions of gender

In 2020, Drugs for Neglected Diseases initiative (DNDi) launched a new public webpage dedicated to sharing its commitments, plans and progress towards Equality, Diversity and Inclusion, and defines gender alongside a number of gender-related terms.

The International Planned Parenthood Federation, drawing from an EngenderHealth and UNFPA toolkit, defines gender as “a fluid concept that is present through all social life. It is not biological or natural but is constructed from the images, messages and expectations we see around us. Expectations and informal rules about what it means to be a man or woman (also called ‘gender norms’) can vary over time and according to context. Expectations about women’s roles have seen the greatest change in modern history. The fact that gender norms can be changed means that it is possible to overcome gender inequality. Genders include men, boys, women, girls and transgender people.”

“We live in a time where world leaders promise us the world, but give us nothing, because we don’t hold them accountable. This is where you can make your start - make your organisation accountable by investing in an accurate and inclusive definition of gender, and pushing them on their gender equality commitments so that the words on paper become real.”

Transgender people and people with non-binary gender identities continue to fight stigma and discrimination globally—including within the workplace—and often in the face of health, social, legal, educational and political systems that overtly aim to reinforce a gender binary. The impact of widespread discrimination and marginalisation can be seen in lack of access to appropriate health care services, as well as careers blighted by exclusion and harassment.

GH5050 findings show that only 26 out of 201 (13%) organisations publish definitions that recognise the non-binary nature of gender. In addition, only 21 out of 200 organisations have programmatic strategies that refer to transgender health; this is just 10% of the sample.

Overcoming binary definitions of gender to embrace an inclusive appreciation of gender is necessary to achieve equality. Global health organisations, committed to social justice and gender equality, should be leading the way.

“We view patriarchy as creating and sustaining power inequalities by men collectively over women (including cis and trans women), as well as gender-nonconforming individuals, and by some groups of men over other marginalized men, and as a social force that keeps all individuals from having the connected, fulfilled, and peaceful lives they deserve. We view gender power and gender norms as constructed in relationships among individuals and reinforced by societies and structures, and we strive to work in ways that overcome the gender binary and achieve equality.”