Gender equality: Flying blind in a time of crisis

Now in its 4th year, the Global Health 50/50 Report finds that action to dismantle gender inequality inside organisations and to apply a gender lens in health programmes remains scarce.

The COVID-19 pandemic has proven that gender matters - to career pathways, to people’s risk of disease and death, to shaping equitable, effective health policies. Yet the 2021 report reveals that the vast majority of activities to address the health impacts of COVID-19 ignored the role of gender. In a male-default world, the report finds that gender as a driver of everyone’s health, including that of men and boys, remains under-addressed. The result: gender-blind pandemic responses that are less effective than they should be, with grave consequences for the health of people everywhere.

Flying Blind also reports the appointment of yet another cohort of mostly male global health leaders, predominantly from high-income countries, with the mandate to exert influence over the health and wellbeing of people worldwide. Despite substantial rhetoric, the data reveals little progress towards gender equality and diversity in leadership across the health sector and no progress on closing the gender pay gap among UK organisations mandated to report on it.

Flying Blind in a Time of Crisis

Flying Blind in a Time of Crisis examines the gender-responsiveness of global health approaches in a year where the impact gender has on health and wellbeing has never been clearer. This year, in the midst of an historic pandemic, it delves into the actions taken by 201 of the most influential organisations in global health. Its findings examine whether organisations applied a gender lens in their work to address the health needs of everyone - women and men, including transgender people, and people with non-binary identities.

In a year where workplaces have been disrupted and women’s livelihoods have been disproportionately impacted, the report also extends GH5050’s annual workplace policy analysis to review the availability and comprehensiveness of anti-sexual harassment, family-friendly and flexible working policies. It assesses progress towards tackling power and privilege imbalances in global health leadership and closing the gender pay gap.

Against the backdrop of a calamitous 2020, the report finds notable areas of progress and hope. The new data show that organisational commitment to gender equality is surging, and that organisations are becoming more transparent about their policies on shaping diverse, inclusive and equitable working environments for people.

The latest data also suggest, however, that rhetoric is often used as a substitute for action. Building on four years of evidence, the following four key findings of the report indicate that evidence-informed, rights-based action is urgently needed.

1. Words matter: Most organisations active in global health state that gender equality matters to their work 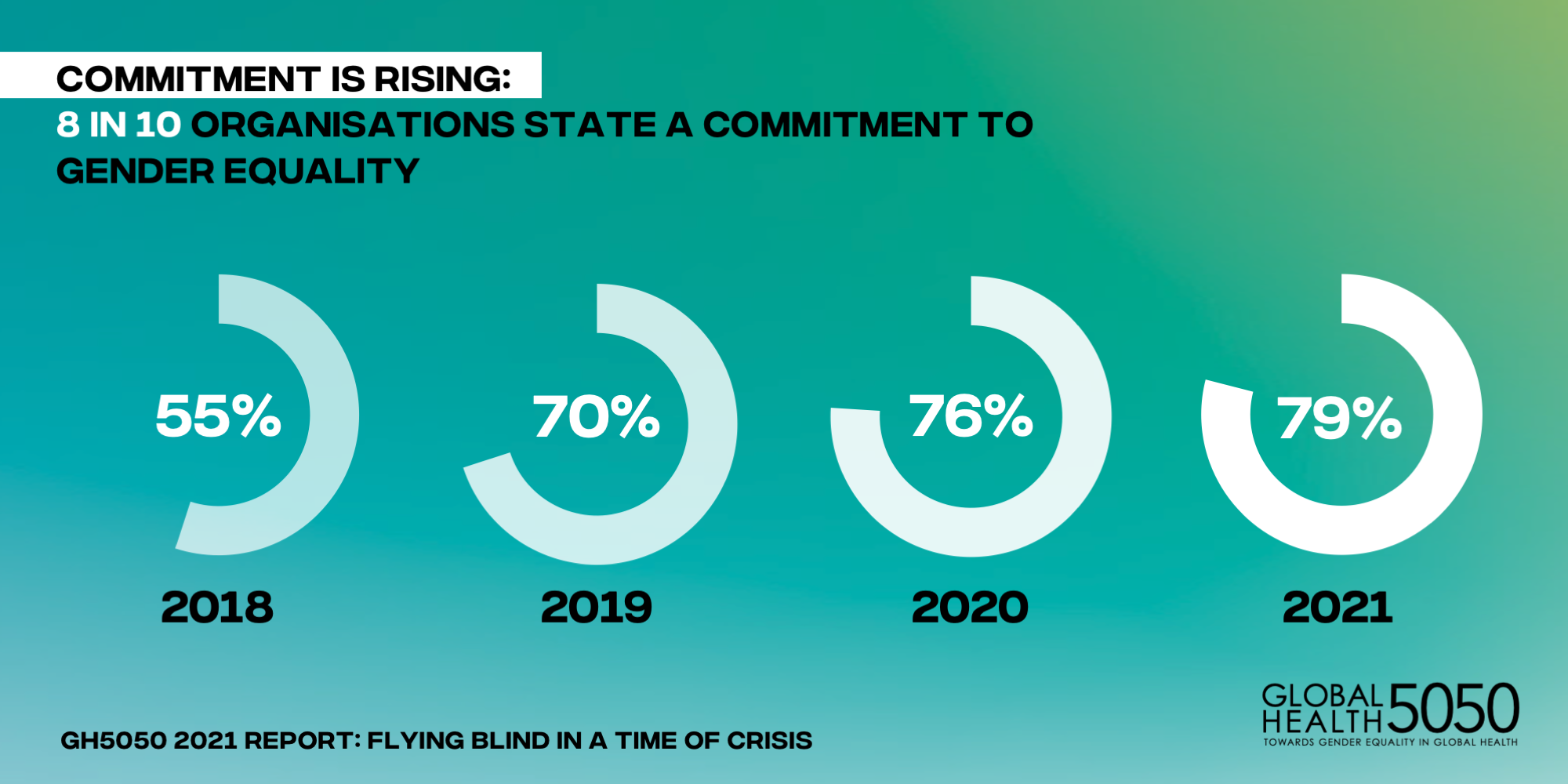 Organisational policies matter. They are the building blocks that not only provide rules, norms, standards and guidelines for organisational culture and ‘ways of working’, they are also the means through which organisations can be held to account.

Gender equality policies were accessible for six out of ten organisations - the same proportion as in 2020. Progress on public-facing transparency, recorded over previous years, has stalled. Diversity and inclusion policies - beyond those on gender diversity - were accessible for half of the surveyed organisations. Reference to diversity and inclusion increased by 10% over the past year.

A small fraction of organisations have transparent board diversity and inclusion policies. Governing boards are among the most influential decision-makers in global health. Commitment and measures to promote diversity and representation in these bodies are on the rise, yet 80% appear to still lack specific policy measures to advance diversity. 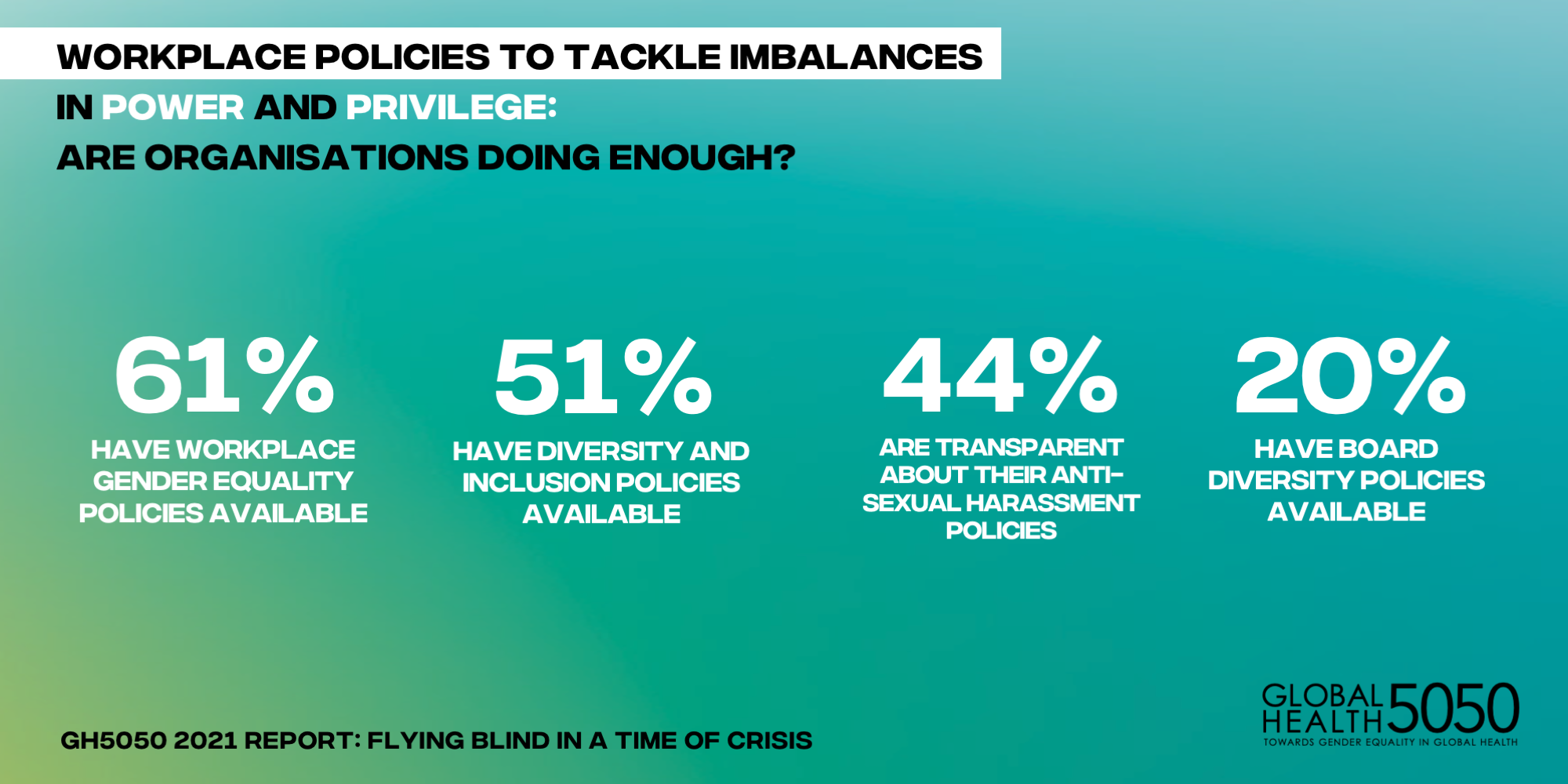 The year 2020 marked the 25th anniversary of the Beijing Declaration and Platform for Action, a global blueprint for gender equality and women’s rights. This year, however, the data reveals little progress towards gender equality and diversity in leadership across the health sector and no progress in closing the gender pay gap among UK organisations mandated to report on it.

One-quarter of CEO and Board Chair positions changed hands in 2020, offering an opportunity to appoint a more diverse cohort of leaders amidst a proliferation of commitments to diversity and inclusion. Data show, however, that men continued to hold 70% of leadership positions and nationals of high-income countries held 84% – marking no change over the previous year, despite the appointment of nearly 100 new leaders.

In the face of multiple global crises, a global health system dominated by individuals and institutions in high-income countries forgoes essential talent, knowledge and expertise, with serious implications for pandemic preparedness, progress on Universal Health Coverage and meeting the health-related targets of the Sustainable Development Goals. 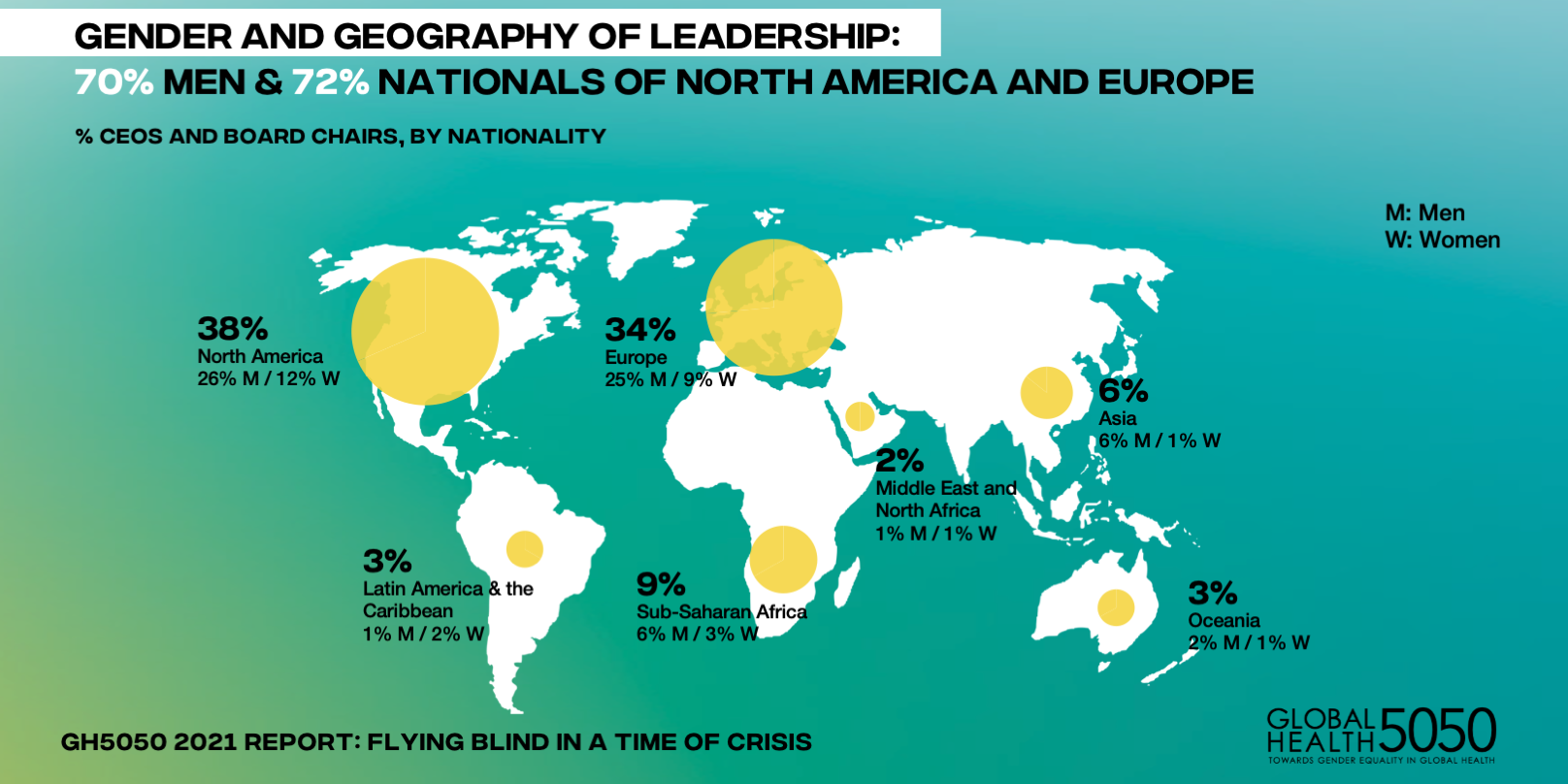 Gender norms play a crucial role in perpetuating disparities in the distribution of the burden of ill-health across and within populations, and gender influences how organisations address the problem(s). Recognition of the role organisations can and should play in addressing the root causes of unequal gender norms and power relations to advance health equity appears to be on the rise. More organisations are adopting gender-responsive language on their core programmes. 39% of organisations position the work they do in relation to transforming gender norms and gendered systems and structures that stand in the way of better health outcomes, an increase of 10% over the previous year.

Yet the vast majority of programmatic activity to prevent and address the health impacts of COVID-19 largely ignored the role of gender. Evidence gathered by the GH5050 collective of researchers, strategists and practitioners shows that gender influences everything from who gets tested for COVID-19 to risk of severe disease and death. Yet the report finds that support across a range of WHO-recommended areas for pandemic responses - including vaccine development, prevention, access to treatment and care, health workforce protection, and surveillance - was largely gender-blind.

Comparing these findings with the stronger performance on gender-responsiveness of organisations’ core programmatic activities indicates that gender has been deprioritised in this time of crisis. 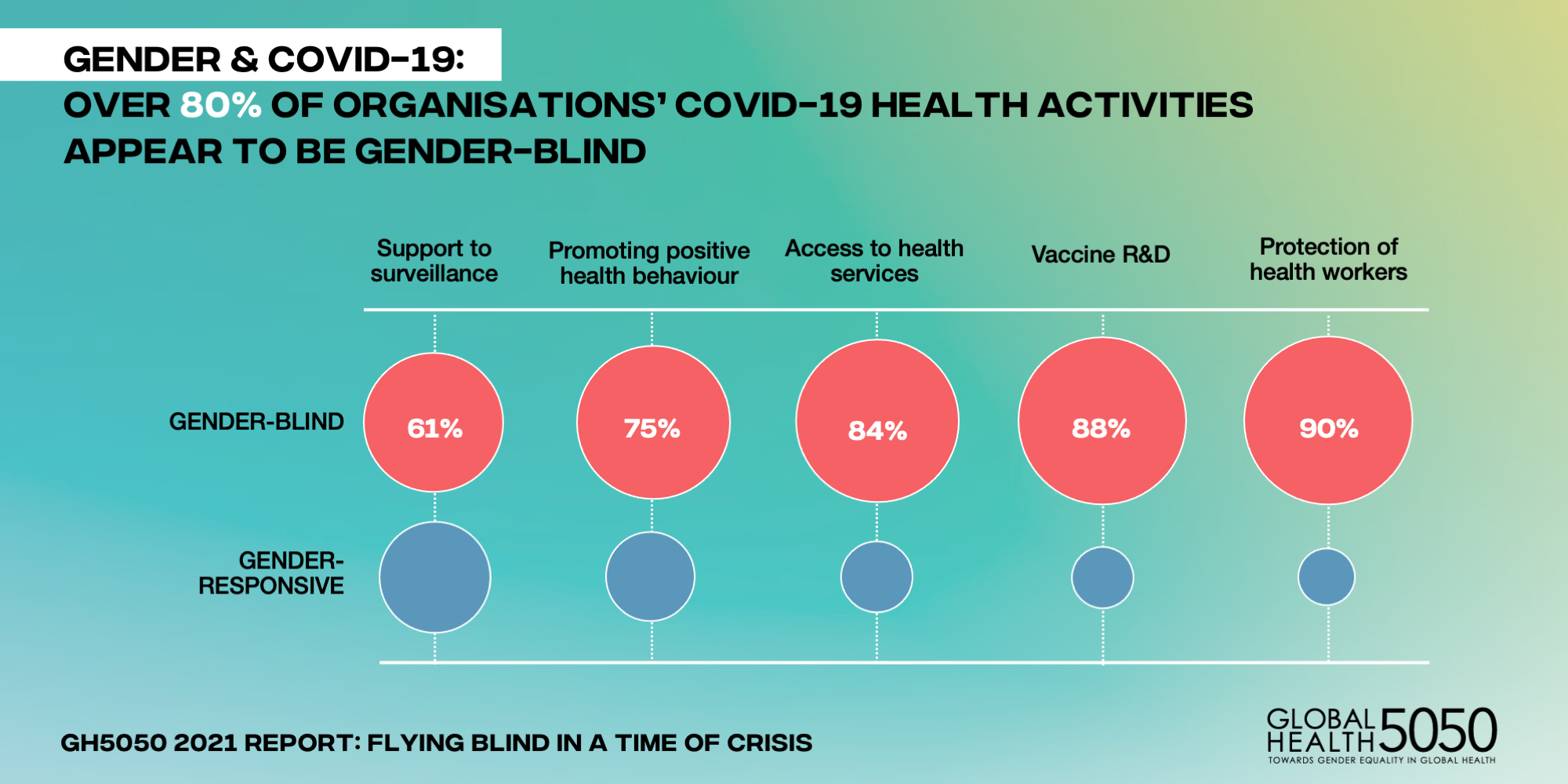 Gender inequality is not inevitable; it is made by people and reinforced in systems and organisations, including global health. And it can be unmade within those same systems.

Towards this end, notable improvements have been made since the 2018 publication of the first GH5050 report. 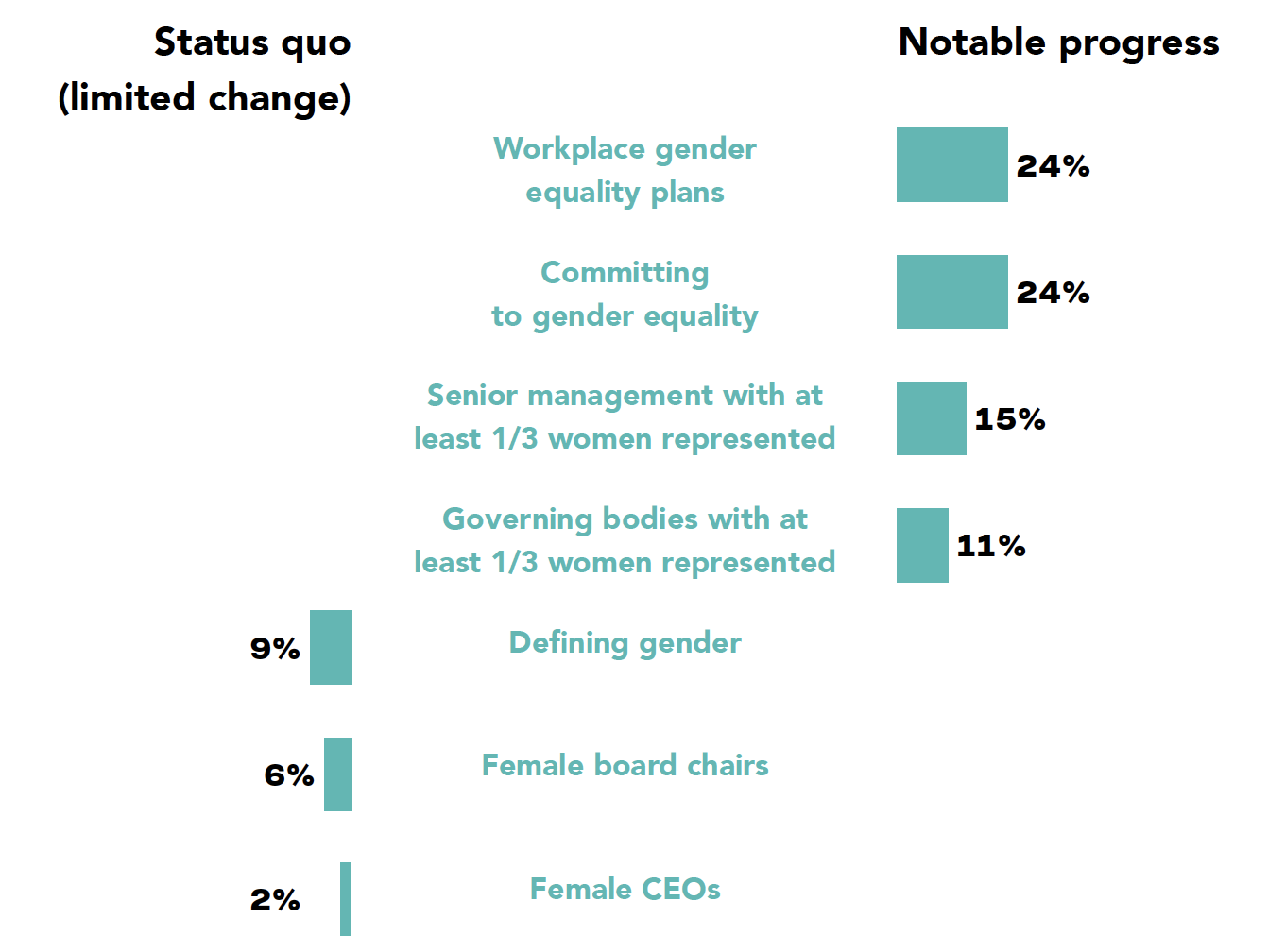 Gender equality is a precondition to achieving our shared ambitions of the Sustainable Development Goals by 2030 and delivering Health for All. The health and well-being of the people both employed and served by organisations active in global health cannot afford another year of missed opportunities.

The data in “Flying blind in a time of crisis” can equip leaders at all levels – from communities to workforces to boards – to take concrete action, drive change and hold those in power accountable. To support this effort, the report collates numerous resources and recommendations to inform, inspire and incite organisational change.

Every year, Global Health 50/50 shines a light on whether and how organisations are playing their part to address two interlinked dimensions of inequality: inequality of opportunity in career pathways inside organisations and inequality in who benefits from the global health system.

Now in its 4th year, the Global Health 50/50 Report assesses 201 global organisations active in health and health policy. The report publishes findings of the Gender and Health Index across four dimensions:

(1) Commitments to equity
(2) Presence of workplace gender equality and diversity policies
(3) Gender and geography of global health leadership, and
(4) Whether gender is addressed in health policies and programmes.

The Gender and Health Index is the world’s most comprehensive interactive database on gender in global health organisations. It is designed to advance action and accountability for gender equality and social justice in global health workplaces and programmes.

To engage with us on advancing gender equality in global health, or to learn more about our methodology, collective, leadership and values, contact us at: info@globalhealth5050.org.